In this GameSpot exclusive, we're taking a look at the new trailer for Bushiden, a retro-influenced ninja action-game set for release in 2021 for PC and consoles.

In 2018, developer Pixel Arc Studios found success on Kickstarter with its pitch for Bushiden, a new ninja action-game that pays tribute to classic 2D titles from the '90s. As a Metroidvania that stars a cyborg ninja, it blends the high-flying, fast action from Strider with the sense of exploration and progression found in Castlevania: Symphony of the Night, which certainly gives it some impressive style. Set for release in 2021 for PC and consoles, and to be published by Humble Games, Bushiden is approaching its release window, and GameSpot has an exclusive on the new Gamescom 2020 trailer that explains more of the story.

Throughout the trailer, we get to see many of the interconnected locales that the protagonist will travel to. Along with that, we see the appearance of the main villain Gaoh, who has kidnapped the hero's sister. Before this reveal, we had the chance to hear from developer Chris Crawford from Pixel Arc Studios about the making of the game and his response to Kickstarter's success.

"The [initial] response was overwhelming," said Crawford. "We felt confident that people would be excited for a game like this when we started the project, but the outpouring of support we received during our Kickstarter was incredible. It motivates us to this day, and the excitement we saw once we hit our funding goal was amazing. It felt like a true celebration on our social media and Kickstarter pages!"

He explained further that Bushiden leans heavily into the gameplay pioneered by classic games like Mega Max X and Final Fight, which gives its combat sequences some added edge. Along the way, you'll be able to upgrade the cyborg ninja's powers, allowing him to use his mechanical arm to pierce through enemies and pummel larger foes. He'll even use traditional ninja skills like spells and other trick weapons in his arsenal.

So far, Pixel Arc Studio's ninja action-game is shaping up to be a fun throwback to a classic era of gaming, and we're looking forward to seeing more of the game in the future. 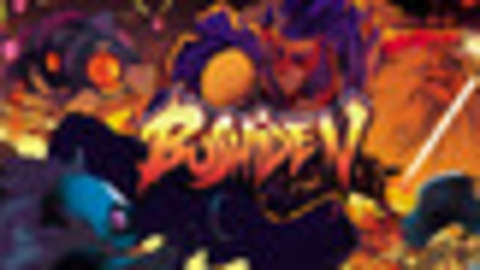