23 Minutes Of Beyond A Steel Sky Gameplay

Check out the opening of Beyond A Steel Sky, the follow-up to the classic '90s PC adventure game set in a massive, technologically advanced city during the post-apocalypse.

Beyond A Steel Sky is the follow up to 1994's cult-favorite PC adventure game Beneath A Steel Sky. Created by Charles Cecil and Revolution Software, the same team behind the original game, along with the Broken Sword series, Beyond A Steel Sky sees the return of protagonist Robert Foster, a survivor living in the Australian wasteland during the post-apocalypse. The original game saw Foster explore Union City, one of the few mega-cities in the wasteland, and the sequel continues that focus on exploration and interaction with many oddball characters. This time, there's much more emphasis on interacting with the communities in and around the city, while manipulating the systems of the environment to further your story.

In this gameplay video, we show off the game's opening, which reveals what Foster has been up to since the ending of the last game. Like the original game, Revolution Software has collaborated with famous comic-book writer and artist Dave Gibbons, whose other works include the Judge Dredd series and Watchmen. With the sequel, there's more of a focus on emulating the comic-book aesthetic, placing a stylistic emphasis on bright, vivid colors and narration shown via pop-up text-boxes. Like the original, it shows off a more busy and dynamic side of the post-apocalypse, moving away from the darker color palette and sense of isolation that the genre is known for. So far, Beyond A Steel Sky is planned for release on PC and iOS, via the Apple Arcade. An official release date hasn't been set as of this time. 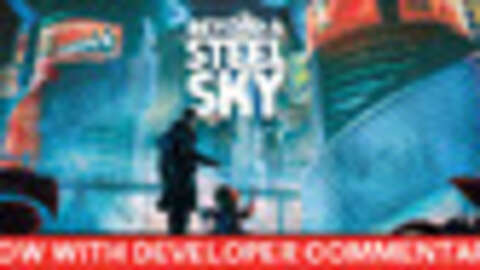 Beyond A Steel Sky