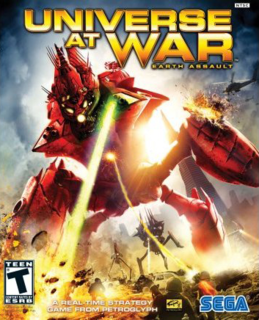 A B-movie lover's dream with a lot of unrealized potential, weighed down by technical glitches.

User Rating: 8.5 | Universe at War: Earth Assault PC
By OrkHammer007 | Review Date: December 29, 2007
Universe at War: Earth Assault is the latest game from Petroglyph Studios (Star Wars: Empire at War), founded by former Westwood (C&C) employees. It takes place in 2012, and uses the time-honored "Earth is invaded by aliens!" storyline... with a nasty little twist: other than the two opening missions, humanity is not a playable race.

Instead, three alien factions fight for control of our planet, with mechanics so different, you almost have to relearn the game when you switch between them:

The Novus, a race of artificially intelligent machines (whose creators were destroyed by the Hierarchy), use a network of energy beams powered by "Flow" to both expand their base and transport units; they also upgrade on the fly using "patches" to universally alter their defense and other capabilities. Resources are scavenged from inorganic materials and scrap from the battlefield via bots controlled from a recycling center

The Hierarchy, a locust-like race of... somethings... and the game's prime villains, employ gigantic upgradeable walkers as both weapon platforms and unit building structures; "hardpoints" on each walker can be outfitted with various options to boost production, offense and defense, both for themselves and surrounding units. Resources are literally ripped from the surrounding landscape by Reaper Drones, which will grab nearly anything: buildings, scrap, people, cows...

The Masari, a super-advanced human-like race (who, apparently, created the Hierarchy before being overthrown by them) manipulate energy to produce structures and units, as well as alter the way they fight by toggling between "Dark" and "Light" energy modes, each with advantages and disadvantages. Resources are produced by engines which collect it from their surroundings; in that respect, they have the least impact on their surroundings.

Each side also gets three hero units, with some interesting (but not game-tilting) special abilities. In skirmish games, they are unlocked by researching "suites" of related technologies; there are 12 for each race, but only six can be active at a time. If you change your mind, however, any research can be sold back and a new one purchased.

The single-player campaign comes in four phases: the prelude (2 missions with the humans, which show the end of the initial invasion), the Novus (where we're introduced to Mirabel, the lone Novus "organic," and Viktor, her intelligent battle suit, through several missions), the Hierarchy (which centers around Orlok, the commander, and definitely showcases the Hierarchy's evilness), and finally the Masari (which has one scripted mission before launching into a grand strategic campaign ala Risk, Dark Crusade, etc.; this was rather disappointing, given the storyline in previous phases). The dialog was nicely cheesy, as befitting a B-movie ("I wish you a statistically favorable outcome" sticks in my head) and further cements it among the great '50's "saucer men" films.

A "Scenario" mode is also available, allowing you to play the Risk-like metagame with any race.

The game itself focuses on a tactical rather than grand strategic scale (like Supreme Commander), but does pretty well for itself. Combat is furious, and unit management is much more critical due to extra abilities each unit has. All units are useful throughout the game and no one unit (except maybe the walkers) is absolutely dominant.

Design-wise, each race's units reflect the feel of the entire race: Novus units are shiny, sterile white robots, Hierarchy units are brutal and organic, and Masari units look as if they stepped out of a gladiatorial film (although none of Rome's pit fighters carried energy weapons) in keeping with their "Warriors of Atlantis" theme. Sounds for weapons match pretty well, but seem to be recycled a bit from other games on the market. An original score from Frank Klepacki (who also wrote the music for the early Command and Conquer games) adds a nice solid touch.

What keeps the package from being top-notch is the lack of many modern RTS amenities: infantry are trained in the old, unrealistic "one-at-a-time" method rather than squads; lack of terrain and cover mechanics; lack of flanking or facing bonuses; the list goes on.

Technical problems also hamstring UaW. Its reliance on Games for Windows Live to register achievements and play on-line caused many PC-only gamers to scramble for a missed update, which led to a lot of crashes and lockups on my machine; also, since it begs to connect every time you play, if you don't give it access through your firewall, more crashes ensue.

Then there's the multi-player revolt: to access common on-line features such as ranked multi-player, an additional fee is required for a Gold subscription for XBox Live. If you're like me, and don't own an XBox360 (or intend to buy one any day soon), this is just outrageous bordering on robbery (since I don't plan on playing online much, it doesn't really affect me). Because of this, many have taken to staying away from those type of matches; keep this in mind if multi-player is a strong reason for purchasing a game.

Overall, UaW is a wonderfully fun B-movie-turned RTS. With some more patching, and some new features added (whether by mods or expansions), this could turn out to be the sleeper hit of 2008.
Load Comments (0)