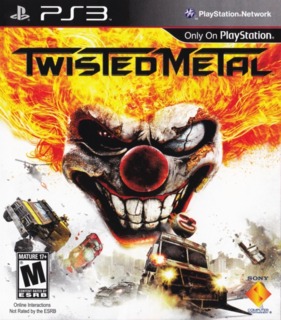 The most challenging Twisted Metal yet

The ps3 Twisted Metal has many new vehicles and things to do. New game modes such as racing and fighting while staying inside a barrier. You can play as the helicopter Talon which can pick up enemies and shoot them with a tri-gunner. You can also play as the semi-truck Juggernaunt and just ram into your opponents which gives them a lot of damage. In story mode there are 3 characters you play as Sweet Tooth, Mr. Grimm, and Dollface all of whom have their own stories and special boss. Sweet Tooth's boss(es) are 2 giant monster trucks driven by Mr. Grimm and his gang. Mr. Grimm's boss is a giant robotic Dollface who first you fight in the air then on land. And Dollface's boss is Sweet Tooth's Carnival of Carnage which has 4 different parts. First part is you fight your way into to the carnival truck. Next, you have to drive into one of the clowns holding dynamite and ram into the giant clown head before it explodes 3 times. Next you drive across the race track with while avoiding different obstacles. Lastly you're in Talon fight clown head head on a crane who breathes fires, ad you have to pick up bombs and drop them inside of the clown's head. There are many different trophies too such as beating story mode without dying and destroying a car with in full health in one hit. This is the most challenging Twisted Metal yet and highly recommend it to all ps3 owners