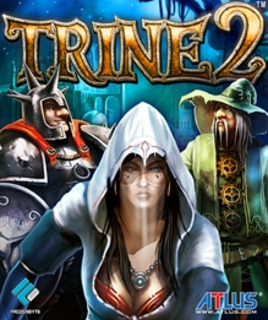 This game really needs to be appreciated.

User Rating: 9 | Trine 2 PC
By Vlaimir_Lem86 | Review Date: December 8, 2011
First off, if you never played the first Trine, dont worry. The two stories dont mesh together at all (other than the fact that all three of you know eachother from the previous game).

Gameplay itself is your basic sidescroller, aside from the fact that you can change between 3 characters on the fly. A Ranged character (bow), a Tank character (Sword and Shield), and a Wizard. The three characters are pretty straight-forward, discounting the Wizard, who makes blocks and planks to stand on, as well as levitating objects ( any movable object for the most part). He can also levitate enemy monsters, and throw them into lava, off cliffs, etc etc. Throughout the game you collect orbs, that allow you to "spec" your characters, which adds a nice RPG element to the game.

As for Graphics, they're absolutely amazing for a sidescrolling game. When i say amazing, i mean just that. Dont think Side-scroller with this much detail. The backgrounds mesh with the foreground to give it a believeable 3D feel, but at the same time, staying true to being a sidescroller. Monsters also dont just "appear" from offscreen, the jump in from the background to fight you. Most amazing scene halfway through the game when you're running through a forest, and you run across a flowing waterfall/river. Depth perception is dead on, as well as the flow of the water from the background to the foreground, as well as over rocks. As well as the games representation of Light, from the Sun or from Lamps, its truely incredible for an indie game.

The game in general, does get repetitive, and the puzzles near the end of the game do seem awkward, and kinda forced. Also, the fact that the wizard can complete every puzzle/platforming event in the game... and the Tank can take care of all of the monsters... the Ranged class is hardly used. Enjoyed the previous game more in terms of progression.. as you were given abilities as the story progressed, and not solely through "spec" points, added "something to look forward to" and a reason to try earlier stages again with those new abilities, once you beat the game.

Took me about 4 hours to complete, with only 80% of all of the orbs secret poems and artwork unlocked. Ill play through one more time i assume, its a great game for the $$, and the Art Designer/Director REALLY needs to get some credit for this, amazing in that aspect.
Load Comments (0)