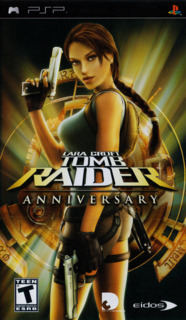 Tomb Raider is a classic franchise. Personally, I find the latest iterations to be phenomenal games. After playing Tomb Raider Anniversary, I can see why the series has endured, but also why it has taken so long to become something truly worth raving about. This particular title is fun at times, but that fun is strung together with excruciatingly monotonous and tedious game-play. When you are practically doing the same thing over and over again throughout your journey, not to mention having to redo half an hour of progress after a simple screw up, it becomes more like a chore than an adventure. Tomb Raider Anniversary is a fine distraction if you're looking to play something retro. However avid gamers will likely get very frustrated by the widely spaced out save points and how finicky and precise the game is in its demands. If you have a lot of patience, and I mean a lot, have at it. Otherwise, play one of the newer ones.