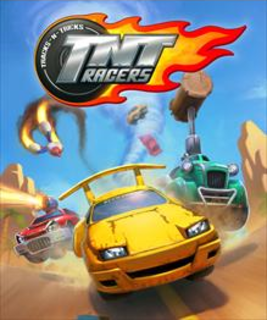 TNT Racers doesn't do anything new, but does everything right. It should be remembered as all-ages fun for a long time.

User Rating: 7.5 | TNT Racers PSP
By Granpire | Review Date: December 6, 2011
TNT Racers is a little-known arcade racer with fun, simple gameplay and a pleasant presentation. Although the content is accessible to gamers of all ages, the game hides some impressive challenge beneath the surface, mainly with its smart and difficult AI opponents.

You are greeted with a clear menu and nice, cheerful jazz music upon first entering the game, and you have the option of taking challenges or quick races against computer-controlled opponents or other players. There aren't any fancy bonus or mini-game modes, but this game isn't about presentational flairs or peripheral game modes, it's about fun, straightforward racing.

And what fun it is! The environments are colourful and diverse, complete with white and chilly-looking snowy tracks, lush green jungles, and bright and wide canyons. Powerups are plentiful and exciting, from the black oil slicks to the time-warp to the large hammer that causes the earth to shake. Controls feel tight, and plenty of varied terrain makes it enough of a challenge to stay on the track that you're always kept on your toes.

The first set of challenges should be none at all, but after you've cleared the first few, you start to realise that the game's AI is particularly skilled, usually exceeding your own skill level. It is refreshing to see a game offer some challenge, while still remaining accessible to younger audiences.

If the challenges prove too difficult, or you're simply looking for a change of pace, you could always try playing with a friend. The online play, as other reviews have stated, is quite dead, so counting on this aspect is unwise. However, the game does have a local multiplayer mode that works great. There are even some badges(accomplishments) and bonus cars to unlock by playing multiplayer races, and there is no lag or issues with Ad-Hoc play or Online play.

TNT Racers offers plenty of simple, unadulterated fun for all ages. It's a throwback to classic cart-racing games like so many others, but it's the one that rises above the others, hopefully ushering in a new generation of powerup-fueled racers.
Load Comments (0)