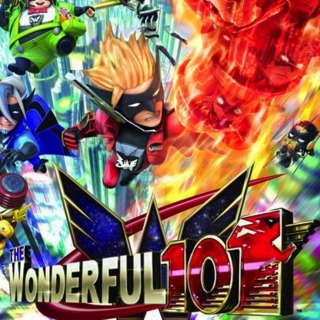 Action-packed and fast-paced, The Wonderful 101 features a stellar battle system and amazing characters

The latest in a line of games that includes the overwhelmingly beautiful Okami, the gory Madworld, and the thrilling Viewtiful Joe, The Wonderful 101 shares one trait in common with all those titles: it is brimming with personality. Better described as Pikmin on steroids and a whole lot of caffeine, it is a game that does not take itself one tiny bit seriously. Sporting the somehow clichéd message that with teamwork and mutual trust there is nothing that cannot be overcome, the game manages to broadcast it without being cheesy, and even though it has a considerable amount of flaws, the thrill of its action-packed gameplay is not met by any other game of the Wii U's early life cycle.

The game takes place during Earth Defense War III, which beings after a group of aliens - appropriately named GEATHJERK - attempts to invade the planet. William Wedgewood, an elementary school teacher, is on the school bus with his students when the attack commences. As the vehicle is blown up by the blast of one of the alien army's giant robots, he reveals himself to be Wonder-Red, the leader of the Wonderful 101, whom together with his other skilled allies must join forces to turn the mighty alien forces to dust. It is the perfect storyline for a mindless beat 'em up, but - as it is to be expected from a company like Platinum - The Wonderful 101 ends up going much deeper than that.

For a game of its kind, The Wonderful 101 packs a surprisingly amount of storytelling and character development. Not only are the the game's plot and the growth of its cast masterfully done, they might as well be the its strongest feature. Each one of the seven leaders of the group of superheroes have distinct personalities that, while unidimensional, are smartly explored by Platinum to their fullest, creating a core of heroes that is extremely likable and whose many relationships offer golden opportunities for dialogue that ranges from conflict to friendship. As if the vast group of central heroes was not enough, the game also has a considerable amount of supporting characters that come together with the game's biggest stars to form the threads of one epic storyline.

The game wisely takes advantage of its voluminous plot to give strong support to its gameplay. Even though the game is divided in many pieces, featuring a total of thirty missions, every single one of them provides a considerable dose of humor, silly dialogues that make players' bonds with characters grow stronger, and occasional story developments and twists. Sometimes those morsels of good writing appear in the midst of the missions, as the group takes a break in the middle of all the chaos to fool around or fight amongst themselves, and pretty much all operations end with some good-natured exchange. But regardless of when those moments come, they are always enjoyable, and their rewarding value keeps players going strongly throughout the game. In a testament to how good the game's writing is, by the middle of the journey it is impossible not to feel you are hanging around with a bunch of awesome super-powerful buddies.

The Wonderful 101 does all that while constantly exuding a fantastic vibe where superhero comic books meet Saturday-morning cartoons. And nowhere is it clearer than during the absolutely ridiculous cutscenes where enemy robots that are as tall as a mountain are brutally dismantled by fantastic series of attacks. Although those moves are performed by quick-time events, there is nothing to criticize here. It is all done incredibly smoothly and naturally, and the mighty explosions that follow every massive hit blast any complaints away with their sheer magnificence.

That simultaneously epic and loose feeling transcends cutscenes and dialogues, infecting the gameplay itself with a large level of careless excitement. Though the game's many missions do offer a few smart puzzles, their focus is combat. Controlling a group of up to 100 characters, players must navigate through stages in an isometric view while using the group's powers to proceed by uniting to form bridges, ladders and other objects, and blast enemies away with tons of hits. By the end of each mission, players are awarded a medal based on the time used to defeat all the enemies, the damage taken, and the awesomeness of the combos that were performed. Getting good ranks is absolutely difficult, and it sends the game's replay value and challenge through the roof.

At the start of each mission, you will be in control of about twenty heroes, but as the operation goes on it is possible to recruit more people and increase your numbers to 100. Having lots of allies is vital during battles, because a larger number of wonderful ones means that more powerful versions of attacks can be summoned during combat. Given the game's focus on combats, the quality of its battle system is of utmost importance, and The Wonderful 101 does not disappoint in that regard. Each of the main seven heroes has its own special move (a giant punching hand, a sword, a gun, a whip, and even a bomb that slows enemies down temporarily), and those attacks are quickly activated by drawing a specific shape on the gamepad's screen that makes the heroes unite to form the weapon.

By using the gamepad to to switch between leaders and attacks, the whole process becomes seamless and quick, which plays right into the hands of combat sections that are often frantic and require timely strategies in the midst of utter chaos and flooring explosions. The vast enemy variety keeps battles entertaining throughout the war, and even though most foes can be beaten by any of the available attacks, there is frequently a more effective strategy that can only be found by some trial-and-error and, especially, mastery of all the moves - which can lead to some awe-inspiring combos that make it possible to destroy even the most powerful enemies before they can touch the ground and recover from the beating.

What truly makes combat one balanced and fairly challenging affair is the game's Unite Gauge. Although it is possible to power-up attacks by holding the A button (if you have sufficient numbers) and conjure up defensive forms to evade or block incoming attacks, those actions have a cost: they consume the gauge. Even if it does refill itself as time goes by, the gauge imposes a restriction on the usage of upper tier moves that can considerably shift the power balance during battles. In addition, the existence of the gauge, not to mention the marathon-like feeling of some of the lengthier battles, add a layer of depth to the battle system that keeps the game well away from being a senseless beat 'em up, which would have otherwise heavily diminished its value.

For all its greatness and the unbelievably epic scope of some missions and battles, The Wonderful 101 has a big amount of flaws that lead to some frustration. For starters, the game's camera has the weird habit of zooming in whenever you start to move around. While it is not bothersome during battle - the camera is flawless on those occasions - it is downright annoying during the exploration segments in-between combats, especially given the fact that the game has a lot of cool collectibles hiding around the scenarios. Hence, the camera, unfortunately, makes it nearly impossible to locate them all without having to stop every ten seconds to zoom out and look around.

Another glaring issue is that the game often does a very bad job in explaining itself. As your team gets stronger, attacks are slowly updated and new combos are unlocked for each one of them. Sadly, the game never tells you how to perform them, and where a visual cue with the buttons would have sufficed, players have to halt gameplay and pro-actively look for the tutorials on the game's menus; a much more boring solution. The same lack of presentation affects many of the items, moves and power-ups that can be purchased on the game's shop, which are never introduced and can only be found if players mess around with the menus.

In its technical aspects, The Wonderful 101 is a mixed bag. Its sound is absolutely flawless, starting with the game's superhero-like songs and extending to the fantastic cartoonish voice acting. Meanwhile, its cutscenes - while not technically impressive - are an absolute wonder to look at, and its impossible to get tired of both the interactions between the team, and the giant robots exploding into gorgeous gaming glory in absolutely epic ways.

However, the game stumbles a little in its graphics. Although it must be considered that there is a lot going on the screen at the same time, the environments are far from being detailed. During battle - when the game needs to process the movement of 100 characters - some frame rate drops occur here and there. Even if its ideas are big and well-executed, it is in the graphics that it becomes visible that The Wonderful 101 was built on a tight budget.

In the end, though, instead of making players pity the title, those financial restrictions make The Wonderful 101 even more fantastic, because - most of the time - it is a very nicely produced game. The fifteen hours of its main quest are complemented by lots of great collectibles, not to mention the adjustable difficulty and the true challenge of getting great ranks on all the missions. The game strikes a surprising balance between gameplay and stellar storytelling, and its combat system is extremely well-built. By the time the task at hand is finally accomplished and earth is saved once more, players will start missing the gang of heroes and their fantastic personalities. It is the ultimate proof of the power of its greatness, as it shines through its many flaws, and makes us hope they will return very soon. Earth Defense War IV cannot arrive fast enough.