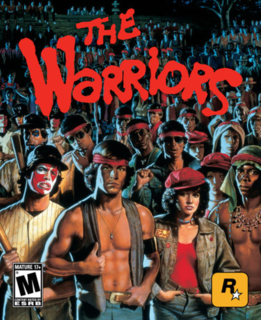 i loved it, all time favriot

User Rating: 10 | The Warriors PS2
By kman7777 | Review Date: August 20, 2010
The warriors is my favriot game its about a movie based on gang violence in 1970. The warriors are a small gang whos leader and general was from the destroyers and they left because vergil (leader) set them up to die againts satans mothers. Cleon and Venon left and made the warriors. They met swan and cowboy at a king of the hill battle and then ajax and snow then chosie and last but not least Rembrant. The warriors had you first as rembrant to destroy the destroyers turf. and it was war between them since. It all ended when you travel to their turf and kill virgil and the destroyers. next was The orpens when they told the bopper station that they wasted the warriors and trashed the orphens during every mission the say 30 days befor meeting its telling you a peace treaty created by the riffs and along the way the warriors have benn making a name for themself by beating every crew except the riffs and the rouges.The warriors are invited to the meeting and they attend it. while Cyrus was talking he was shot by the leader of the rouges and blamed it on the warriors so now the warriors are on the run and a long way from home which they are trying to get to. Every crew is seaching and want to kill them they relize Cleon was killed by the riffs and their have a long journey home and swan kidnaps the orphans leaders girlfriend mercy an dwhen they get home the riffs found out the rouges killed cyrus but the warriors dont know that so they get chashed around coney island their home in New York untill their at the beach where swan the new leader because Cleon, Vernon died and Ajax got arrested, Throws a knife which wound the rouges leader untill the riffs got their. During the game you can get stronger and special abilities with bounus mission and flash backs and unlocks gang members for brawl.
Load Comments (0)