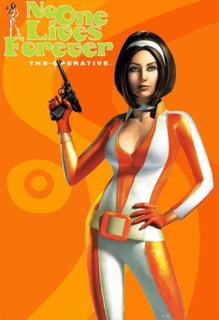 NOLF offers a very welcome break from the bulk of self-serious shooters in the world...

User Rating: 9.4 | The Operative: No One Lives Forever Game of the Year Edition PC
By JOE714 | Review Date: November 14, 2006
Most first-person shooters involve some very serious business, particularly those that aim for a certain degree of realism. There are plenty of titles on the market with solemn assassinations and deadly raids; hardboiled dialogue and stentorian boss monologues; bombings and burnings and beatings; stately HQs and ratty safehouses; and, of course, dogs and cats living together in the face of mass hysteria. Some games inject a few one-liners and witty pop-culture references through the vocal chords of their protagonist – like Blood’s Caleb, the Postal Dude, and good old Duke – in order to leaven the slower moments of a bloodbath, but truly funny titles involving gunplay were extremely rare before No One Lives Forever.

Make no mistake: NOLF still contains the same elements I listed above (all but the cats, although there are some robotic dogs), but the entire gameworld is viewed through the filter of a very off-kilter ‘60s Cold War spy flick. The game frequently draws comparisons to its movieland cousin, the Austin Powers trilogy, and the relationship is very apt in terms of both series’ gaudy flower-power color schemes and outlandish “judo chop!” brand of derring-do. On the silver screen, Austin is the source of much silliness, but due to the game’s internal perspective, NOLF’s protagonist, Cate Archer, is typically the most earnest and competent person in the room. She takes advantage of her adversaries’ airy drollness and the working-stiff klutziness of their henchmen to sneak and snipe her way into some genuinely impressive situations, foremost among which is a startling high-altitude disaster that turns into a giddy freefall.

In addition to NOLF’s refreshing art design, glib comedic flair, and well-executed Bondian crises, the game’s stealth sequences are particularly top-notch. That’s a high complement coming from someone who prefers the loud and bloody action of, say, Painkiller to most titles that share a common ancestry in the “make no sound, leave no trace” Thief series. Happily, although some levels in NOLF are completely unforgiving of any overt contact with the enemy, Cate can still pull off a silent kill with her crossbow or carbine. Subverting HARM’s guards and security systems is also a lot of fun with some ingeniously designed semi-high-tech “spy tools,” which include everything from simple, innocuously distracting coins to clunky camera cripplers to a wide variety of bombs and poisons disguised as a lady’s beauty products.

If there is any part of NOLF worth complaining about, I’d have to say that my sole gripe concerns the game’s static cutscenes, which place Cate and her superiors in a number of seemingly unending conversations at Unity’s headquarters. The information about which the characters bandy is pertinent, so I managed to pay attention through each exchange, but some of those segments were tantamount to watching C-SPAN on a slow news day. Once Cate is released back into the big, bad world in her fuzzy rabbit slippers, however, the joys of breaking and entering, deep sea diving, and eavesdropping on some truly inspired “day in the life” mutterings of idle minions return in full.

No One Lives Forever is a welcome reprieve from the somber demands of soldiering and demon hunting. The threat of global chaos and terrors of mortality are brilliantly offset by such out-of-left-field conventions as evil hand puppets, a lot of surprisingly insightful incidental dialogue, and a spunky go-go soundtrack. NOLF’s value is boosted by a decent replay factor, with a few small areas made available as new tools are acquired and the opportunity to pick-and-choose completed levels. I still recommend this title to anyone and everyone -- even almost exactly six years after its release -- whether or not shooters are their thing.
Load Comments (0)