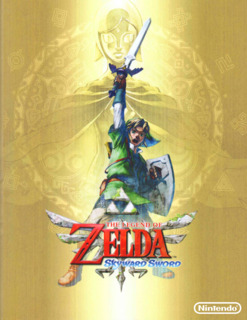 To celebrate 25 years of Zelda, Nintendo has made one of the best games ever! My darkzero review.

User Rating: 10 | The Legend of Zelda: Skyward Sword WII
By Domstercool | Review Date: January 22, 2012
2011 has been pretty hard on Wii owners. There hasn't been many great titles released for the system in 2011, but it's good to know then that Nintendo are making sure Wii owners aren't forgotten this holiday season by celebrating the series' 25th anniversary in the best possible way… with a brand new Zelda game. In doing so Nintendo has made one of the best games to hit any of the consoles, and also promote why we shouldn't throw motion control away.

In something that's a little shocking, Nintendo admitted Skyward Sword takes place before any of the other Zelda games. People have been trying to create a Zelda timeline for years, but only Nintendo knows the real order of the games. Skyward Sword gives us a good look into the history of Hyrule and some enjoyable, if quick, story explanations in the process.

As always Link is the hero of the game. This time around he's best buddies with Zelda, and has been since childhood. The game builds on their important friendship by giving us plenty of interaction between them in the first few hours of the game. Zelda's character is a lot more open, exciting and she has more personality than her past incarnations.

The Navi of the game is a blue mysterious female figure named Fi who lives in your sword. She's a pleasant character to have around and doesn't say "hey" every time she wants your attention.

Apart from the interest in the origin story, the biggest draw to the game is the use of MotionPlus. Twilight Princess came at the launch of the Wii and with that it brought simplistic motion control, with waggle motion enabling the player to use the sword to attack. MotionPlus no longer makes Link a waggle machine; instead you have one to one movement control of his sword and other weapons.

It's certainly no gimmick, as the whole game is based around the idea of the player being able to attack in different ways. For example one of the first main enemies you meet on the ground are the Deku Baba killer plants). They attack by either opening their mouths vertically or horizontally, meaning you have to move the Wii remote in that direction to kill them. Another are the Stalfos skeletons that use their dual swords to block to limit which angle you can attack from. Later on they get four swords, with their main weakness coming from your ability to thrust forward to stab them.

Motion controls aren't just limited to sword swinging. A variety of items Link can pick up in his adventure will use some control of the Wii remote. One of the first is a robotic beetle that you steer by moving the Wii remote up and down for height, and tilting left and right to turn. Using bombs is another good use. If you tilt your Wii remote up and then flick it, it will throw a bomb; likewise if you tilt it down, the game will draw an arrow on the ground and you can pretend you are playing Wii Sports bowling by rolling bombs down hills to blow up things.

These are some of the most responsive motion controls seen in a game. After playing I don't think I want to go back to the original Zelda controls, it just makes the battle mechanics much more strategic. If you try to mash your way through Skyward Sword then expect to suffer, as it can only get you past some enemies. You need to have patience, wait to see how the enemy is reacting and blocking, then slash with the correct angle. Motion controls add more depth to the Zelda formula and are just as important to the franchise now as Z-targeting was back in 1998.

A staple of the Zelda series are dungeons, and Skyward Sword certainly doesn't disappoint in their design. The first, Skyview Temple, eases the players into the dungeon formula. After that each gets better, craftier and gone are the frequent pushing of cubes and setting fire to spider webs. Instead this is replaced with more cunning puzzles, like using time stones that emit an aura where anything trapped inside is acting as if it was in the past – sinking sand becomes solid grass, old broken machines now function as they should – allowing you to traverse areas that you can't in the present. You even get to carry a small version of the time stone around in a dungeon, setting up some cool past-present puzzles to solve. Some of these dungeons are the best in the series, not one of them ever feels like a chore as they are designed in such a way that it always seems like you are solving something.

This is also true for the world map. The people of Skyloft, also the home of Link, only know of the world in the sky. You can fly around and find floating islands that contain secrets, side quests, mini-games and hunt down treasure chests. You can also reach three independent land-based environments under the clouds: forest, volcano and desert.

Link has new and returning tools at his disposal, along with an increased acrobatic ability. A stamina bar is in place allowing Link to have a limited amount of sprinting or climbing. Special moves also drain this metre making sure that you cannot overly rely on the 360 degree spinning slash. Returning weapons include the bow and slingshot, which are still fun to use. Highlights are the new gear, which include a whip that can attach to the environment to swing, or steal items from enemies. Another is a device that is a bag that blows unlimited amount of air out, allowing Link to reveal secrets buried under sand or make platforms swing.

A first for a Zelda game is the new implemented upgrade system. During the adventure you find loot and/or bugs from chests and enemies. This can be used in the store on Skyloft to upgrade accessories like the bow or the beetle, making them more powerful or faster. The bugs are used to make potions increase their effectiveness. It's possible to beat Skyward Sword without having to upgrade anything, but it helps if you do; especially now since shields can break apart after taking damage, and need to be repaired or replaced if this happens. While not complex in loot dropping or upgrades, it's a welcomed addition that makes this Zelda game the deepest yet.

People could argue that the graphical technology in the Wii is nearly 10 years old, but even without high definition there is no doubt Nintendo knows how to make games look good on its system. Skyward Sword is a mixture of the adult nature of Twilight Princess but with the emotional detail and less realistic appeal of Wind Waker. This almost watercolour graphical effect is gorgeous and overwhelms the player in a world full of dazzling species, distinctive characters that are bizarre but charming, and locations brimming with colour. Emotion is captured brilliantly with this art style, specifically in the new cinematic cut-scenes. You've never seen Link express anger as much as the Link in Skyward Sword.

As with Super Mario Galaxy, Nintendo has used an orchestral soundtrack, a first for a Zelda game. It makes any reused classical Zelda melodies suddenly twice as epic. Also the original music is mostly brilliant, and isn't always orchestral; although it's not the best in the series for memorable tunes, it does however have one of the best themes for the franchise.

When you discuss Zelda games it's impossible to talk without Ocarina of Time cropping up. That game is still regarded as not just one of the best Zelda games ever, but one of the best games created. It still plays fantastically as we have seen recently on the 3DS, but with the improvements Skyward Sword brings to the Zelda franchise there is a new benchmark for future Zelda titles to aim for.

Skyward Sword is a refreshing Zelda experience. If you have a Wii then you really owe it to yourself to buy this game and enjoy its 40 + hour adventure. Fans were already going to buy it anyway, and they should be happy because what Nintendo has done to celebrate 25 years of the franchise is make one of the best games ever, and that people is how you truly celebrate a legend such as the Zelda games.
Load Comments (0)