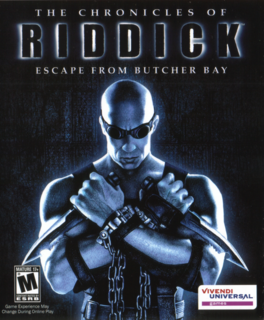 Don't get turned down by the movie! Escape from Butcher Bay is an awesome game.

You're in control of Riddick, a criminal being taken to do some time in Butcher Bay, a high security prison. Riddick is the most wanted criminal in the galaxy and is known for his cruelty and coolness.

Riddick's personality comes into play very early in the game and has an important part in the background. He's a cold and mean mofo with a bad attitude that does not let anything get to him. That might sound like a cliche personality for an action movie but the game manages to paint Riddick as an enjoyable character, with a twisted sense of justice, facing corrupted authorities and prison gangs in his search for freedom.

The game play is a blend of FPS and RPG. The RPG part involves talking to fellow inmates, doing small favors and facing gang leaders to build your respect. It usually requires exploration, a bit of combat and talking to NPC's. All the characters of Butcher Bay talk to each other, they might just exchange formal greetings, provide you with nice background information about the place, guards, administration or give you hints that might prove useful on your quest. Riddick's personality really shine on those dialogues but the NPC's have their own story to tell. It's really worth to talk with all the inmates and spare some minutes com complete all the side quests.

As one might imagine, inmates are not allowed to carry guns so most of them carry improvised concealed melee weapons, which are very important in the game as it takes a while to find a decent firearm.

Combat can be divided in melee and firearms. Personally, I liked best when Riddick used his shiv to backstab a guard or to fight his fellow inmates in the courtyard but there's a fair share of the game where you'll use your firearms. Using guns ain't that bad, it's just not where the game truly shows its potential. Combat fun is augmented by guards and inmates comments on what's going on ... from an occasional - I'm not paid to do this - to - come out, come out wherever you are, motherf*cker - when you hide from tougher armored units, the gritty side of the games is truly its best.

Escaping Butcher Bay will most certainly be a great experience. It'll require a great deal of combat, melee and firearms, a fair dose of stealth but most importantly, to use your wits and to build your respect.
Load Comments (0)