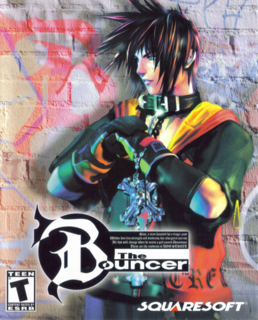 User Rating: 7.5 | The Bouncer PS2
By sayonaragalaxy | Review Date: January 21, 2011
The Bouncer is an odd, atypical sort of fighting game. Unlike its traditional brethren - Street Fighter, Tekken, Soul Calibur - The Bouncer assumes more of the feel of a RPG with the same traits as a fighting game. In fact, this game could be more akin to an old-school side-scrolling fighter from the days of yore if one has an open imagination.

Nevertheless, Square's attempt at a trendy Japanese spiced fighter is a true sleeper, even when it was released. The graphics are fantastic considering when it was released, everything clean and well polished, with a similar feel in visuals to that of Square's Final Fantasy X. Combat is limited to only a handful of different attacks for each of the three playable characters in the story mode. However, these do not inhibit for some heated combat with multiple attackers at once.

The story is short, and you can breeze through The Bouncer in speedy fashion. But there's a huge replay value, with lots of backstory told through the loading screen. Playing as each character offers a different perspective on the story, allowing for some conversations to be heard, while other details are left out for a separate playthrough with another character. And of course, there's a nifty multiplayer mode that allows you to control any of the characters you earn throughout your main-game adventures.

A final nifty feature is the leveling system, giving the game an added feel of role-playing. Experience points are earned with each battle, allowing you to learn new attacks and improve your health/defense/power. You're forced to spend them wisely as you level up your characters. Though this is by no means a popular game, The Bouncer offers an unique take on a fighting game that few other games have attempted. It's worth it!
Load Comments (0)