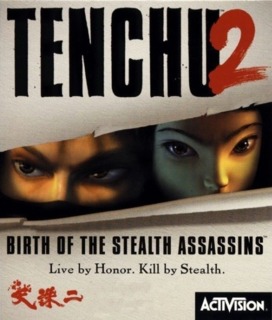 One of the best ninja games you'll ever play.

User Rating: 9.5 | Tenchu 2: Birth of the Stealth Assassins PS
By in2DarKneSs | Review Date: June 26, 2011
This game basically takes every amazing element from the first game and refines it while adding several innovative new features. The end result is a fantastic stealth action game with superb controls and a more immersive story.

Where Tenchu allowed you to play as both Ayame and Rikimaru, Tenchu 2 allows you to complete Ayame and Rikimaru's paths and then play as their older sibling Tatsumaru. Ayame still retains her dual blade style, as Rikimaru retains his single sword style, but where Tatsumaru is interesting is he uses his fists and a single sword. There are other innovations as well, like the inclusion of dragging bodies to escape detection, the ability to swim, and even sheathe one's sword. Each character also has their own branching storylines that intersect at different junctures throughout the game itself.

All in all, I would say this Tenchu fixes a lot of the first games flaws while delivering an incredibly enjoyable experience. If you liked the first you will love the second.
Load Comments (0)