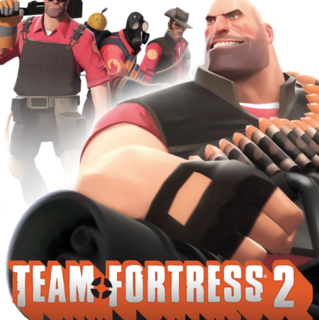 User Rating: 8.5 | Team Fortress 2 PC
By kryu88 | Review Date: October 23, 2007
If you were to combine Looney Toon type antics with a team based First Person Shooter, then you would come up with Team Fortress 2. I say this becaues most of the things that occur in Team Fortress aren't things you would normally see in an FPS. For example, a skinny white guy running around as fast as Road Runner swinging for the fences with a baseball bat at a tank sized man who turns a corner with an enormous machine gun and mows down a whole group of enemy Demomen who were just standing around drinking out of their beer bottles...... That is something you don't see in your everyday FPS. And Team Fortress 2 is not your normal FPS.

There is a big stress on the word, "Team" in Team Fortress 2, because you cannot win a game in TF2 without teamwork. This is probably the best aspect of the game, the coordination you have to have with your teammates in order to win each match. A single person cannot carry a team to victory, a single person trying to win an entire game for their team in TF2 is like watching the kicker in football trying to tackle the entire defensive line over and over....it just won't work. The teamwork aspect is accomplished by having 9 seperate jobs for a player to choose from and each job has its own weapons to aid in a battle. And your whole team will not win if you all go the same class, nine out of ten times you will be wiped out. The balance between classes in this game is what makes it great. Though at times it can feel like a game of Rock, Paper, and Scissors.

The 9 different jobs one can choose from are: Scout, Soldier, Pyro, Demoman, Heavy, Engineer, Medic, Sniper, and Spy. Each one has their own weapons and funtions in game. The Scout is the fastest and can easily overtake enemy capture points before the enemy can do anything. Soldier and Pyro are your offensive cleaning crew, they burn, they fire rockets, and they inflict major pain. Demoman and Heavy are some of the slower units, they're mainly for defense, Demoman is one of the more useful classes all around though. Due to his sticky bombs which you can choose to detonate up 8 at any time. Engineer can build Sentries to defend key strategic areas, or build teleporters to get your team to the other side of the map quicker, or dispensors which gives out ammo and health. Engineers are key for defense and are all around needed on every team.

Medic is also very, very, very necessary. As the name implies, they heal the other units and when they heal enough, they get a "Uber" charge, which temporarily makes them and the unit they're healing invincible. This is key for charging into enemy bases and taking out those pesky sentry guns.

Sniper.....well, he is for the campers or people who don't like to move. But, his gun is very deadly, the longer you hold up the sights a charge goes through the barrel of the gun and inflicts more damage on impact. A good sniper is very annoying on some maps.

Spies....ah spies, you will grow to hate them as Engineers or Medics. They can disguise themselves as anybody on the other team and can pull out a knife and backstab people.....and send them flying hundreds of feet in the process. A backstab is an instant kill, which makes the Spy one of the most annoying classes, period.

One of the downsides to Team Fortress 2 is in the gametypes, you basically have Capture the Intelligence (or CTF), Capture the Control Points.......and that is it...seriously, there are only a couple game types right now for TF2 and it can get kinda old playing CTF and CCP over and over. There isn't even Deathmatch or Team Deathmatch for crying out loud, the two basic gametypes for an online shooter!

TF2 does have its own look though, the cell shaded sort of cartoony look is a nice change from the typical shooter. Which usually features, grimey, eerily realistic graphics, the cartoony look of TF2 is a nice change and makes the game feel unique. Though, most of the stages are kinda the same and there are only a handful of them, which limits the maps you can play. And when you get blown up, you will see little chunks of yourself lying on the ground or in the air, the game is nice enough to tell you what part of your body that is, how kind....I always wanted to know where my head was after I got blown to bits by that rocket. And the flames shot out by the Pyro are very pretty...

The sounds are also very well done, each gun has its own sound effect when you fire it and when you hear that turning of a MG barrel....you'll learn to run in the opposite direction...fast, because that is a Heavy coming around the corner. Or the, "Ping Ping" sound a sentry gun makes as it locks on to its target, you'll come to hate that. The voices for the characters are very well done though, most of them sound British though...don't understand why... I espeically like the Demoman after he gets done drinking his bottle of beer.....funny stuff.

There are also in game achivements to be had in TF2, after you win a certain number of matches you will get a nice little achievement badge or emblem or whatever for your profile. They range from the certain number of matches won, to how much healing you've done, to how many headshots you've gotten, and so and so on. There are an ocean sized amount of achievements to unlock, so if you cara alot about those, then you probably won't stop playing TF2 for quite some time.

Overall, TF2 is a fun online shooter that maintains the team aspect of online gaming, with fun classes to play as and hilarious shenanigans that go on during matches. If they had only put in a few more maps and added in at least a couple more gametypes......
Load Comments (0)