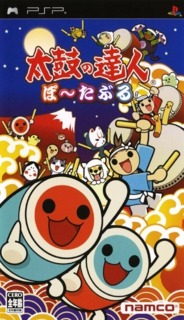 Taiko no Tatsujin PORTABLE is easily one of the best PSP games to be released yet, whether you are new to Bemani or not.

User Rating: 9 | Taiko no Tatsujin Portable PSP
By RIanousuke | Review Date: September 17, 2005
The name Bemani is given to the Japanese "Music/Rhythm" genre of games. Taiko no Tatsujin, Guitar Freaks, BeatMania and of course Dance Dance Revolution. All of these games have very unique control-methods. BeatMania has a DJ mixer, Guitar Freaks has a guitar/controller, DDR has a pair of dance pads and Taiko no Tatsukin (Drum Master) has a large replica of a traditional Japanese drum. It goes without saying that any other Bemani game except Taiko no Tatsujin could not plausibly be attempted on the PSP. . .but it's quite suprising just how naturally it works. You'll find that it will take you less that 5 minutes to become comfortable with the control scheme and not only are the controls ridiculously simple, but the game comes with an insert in the instruction booklet in both Chinese and English that has clear instructions for almost all of the games basic features and controls. Don't read or speak Japanese? Not a big deal! You'll have all four of your PSP's actions buttons (Square, Triangle, O, X) used for normal drum strikes, your D-Pad used for Stronger drum-strikes, your triggers used for rim-hits and the brand-new addition of a bell using your analog stick. You may or may not be familiar with Taiko no Tatsujin's. . . .unique presentation. Highly-stylized characters (Bipedal Disco-Dancing dogs, Cute robotic drums, etc) abound and from the instant you turn the game on and hear "Taaaaaaaaaaaiko no Tatsujiiiiiiiiin POOOOOOOTABURU!" announced in a young Japanese girl's shrill voice . . .you'll know that this is one of the most -almost obscenely- Japanese games you could possible find. If you've ever played Katamari Damacy then you may have an idea of how charming end engrossing that can make a game, and in fact. . . Taiko no Tatsukin just happened to feature Katamari Damacy's theme-song in playable form! King of all Cosmos cameo and all. You have about 30 songs initially available. These vary in genre and quality, but you will be able to unlock a few more great songs. It's needless to say that many people will complain about not having enough songs, but you must keep in mind that that complaint has been made about every Bemani game ever released for a console. Ever. More songs WOULD be fantastic, but what they give you is pretty good as well (Excluding Britney Spears' "I'm A Slave 4 U" and the obligatory "We Will Rock You"). Mini-Games are also included ranging from sumo-fights to helping the aforementioned bipedal dog disco-dance. These are pretty fun for a while but don't have a whole lot of depth to them. One of these games is -however- very interesting because of the control-scheme they used. You will need to hold your PSP vertically and use the analog stick at the bottom to direct falling parts into empty drum-robots to make working ones. Not an incredibly deep mini-game but the control-scheme is really cool. Multiplayer has been implemented in a few ways, as well. You can either play Ad Hoc, share a PSP or use Game Sharing. Yes! Taiko n Tatsujin is one of the all-too-few games that feature this fantastic PSP ability. You can send another PSP a song that it loads into memory and you can play multiplayer with one UMD. Wonderful. All together I would say that Taiko no Tatsujin is an amazing entry into the Bemani series of games, and the fact that it is portable makes it that much better. It is a surprisingly import-friendly game (even though it's strongly ethnic) and is wonderfully addictive. Import at once.
Load Comments (0)