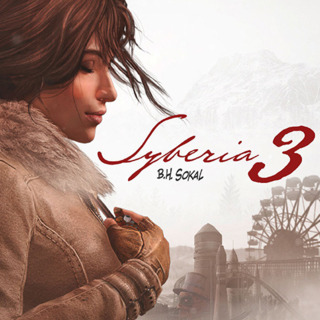 Shellfish forgotten in the adventure crate!

Syberia 3 captures the new adventure of Kate Walker without changing the feel of the series.

The game begins in a non typical to the series way, but so well executed that created a new type of atmosphere in the series that you'd want to experience more from, slowly going back to what we all love about the game!

Environmental puzzles, one very important part of the game have improved dramatically! They are more vast, sometimes taking up more global area to explore and feed resources from in order to solve. There's new mechanics, like searching for items in drawers or boxes - now you must search among junk to find the items you need, but without making the player overly confused because you find only items that will be of your use!

The variety the game offers is huge, but in no way as big as the previous title - Syberia 2, which offered different activities like climbing beautiful snowy cliffs, and fishing that seem to have grabbed the hearts of gamers.

Unfortunately one of the downsides of Syberia 3, only if compared to Syberia 2, would be the lack of such creative puzzle activities. Syberia 3 begins with a new type of variety, but after entering one of the expanded levels - the town of Valsembor - you're caught in a non-stop running back & forth, that's essential for progression further in the game. Later the game manages to balance those aspects again thanks to the story after leaving the town, but then again facing the same lack of creativity when arriving in another big area - The Olympia Stadium.

From escaping asylums, meeting strange people, to diving underwater, facing and living with mythical creatures, finding yourself in strange towns, taking a short course to using contraptions and machines you've never used before, feeling the tension of being somewhere you never belonged, but still leaving trace in your heart, just as the way this feeling has turned the lawyer Kate Walker into an adventurer, making you want become part of it!

Syberia 3 brings the definition of adventure back on track, a genre long forgotten and underrated by action-adventure games that concentrate more on combat than platforming, exploration and story, especially with it's environments and variety, the unknown, but not portrait as something dark, but as something bright - an adventure.

Load Comments (0)
Where to buy
Syberia 3
$49.00 at Walmart
GameSpot may get a commission from retail offers.