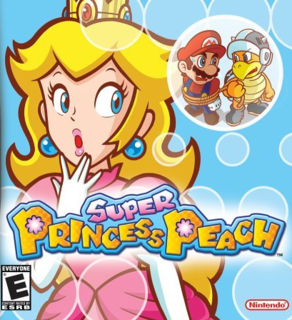 The most surprising DS game I've played in months.

User Rating: 9.1 | Super Princess Peach DS
By zero10999 | Review Date: July 4, 2006
To be honest, I first picked up this game simply because it was one of the very few DS games I don't own (not counting the ones that suck of course). I knew it was supposed to be pretty good but I did not expect it to have any surprises in store. Now that I've played it for quite a while, I can tell you that it is, hands-down, one of the best platformers on the Nintendo DS. My main complaint with the game is that it IS a bit too easy. However, this is made up for by the incredible amount of replayability and just overall fun. Personally, I've always found Mario games to be somewhat too easy (except for the classics of course), and I was very disapointed by the lack of replayability in NEW Super Mario Bros. and Super Mario 64 DS, both of which I beat to perfection in about a week. Super Princess Peach's levels are generally easy but have so many explorable elements and so many things to find. I have yet to acually beat the game (I've had it for about 5 days) simply because the game requires you to find every toad hidden in the previous levels in order to fight the final boss. This makes the game last longer and ensures you'll keep playing for a while. But toads are far from the only collectable in this game. It can honestly take a month or more of dedicated playing to find everything this game holds. One such collectable is Music Scores which are basically the game's sound test songs, but instead of just unlocking a sound test option when you beat the game, you must find (or buy) each song seperately. It has an enemy glossary similar to Castlevania which encourages you to defeat each new enemy. You can even find minigames where you use the screen to control a Toad and you can buy new levels for them with the coins you find in Peach's levels. As you can see, the is ALOT to do in this game and many of the things you have to find can be quite challenging to reach, despite what I said about the game being easy. So, you may be embarrassed to walk into your local game store and ask for Super Princess Peach, but trust me, it's well worth it.
Load Comments (0)