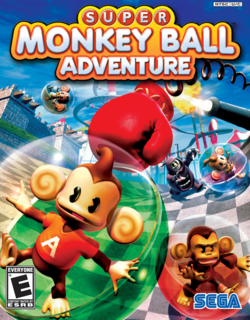 Rolling in a ball has never been this much fun! A definite buy for anybody whose played super monkey ball.

User Rating: 8 | Super Monkey Ball Adventure GC
By MarioShroomed | Review Date: September 20, 2007
A great game starring the original monkey ball heroes. It's an adventure game alright. You go around solving problems and completing objectives all the while collecting banana's (sometimes too many) and solving puzzles that will keep you coming back til it's beaten. You can also visit four, yes four different worlds in your search to help the citizens of the monkey ball world. Truly a great game that must be tried to be appreciated.If you havent played a monkey ball game before this game would be a great start as it's not as hard as the other monkey ball games. There are however a missions that are near impossible. Like the roller coaster mission which even i couldn't complete.
Load Comments (0)