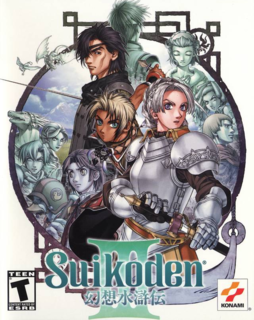 User Rating: 8 | Suikoden III (Konami the Best) PS2
By miracalious | Review Date: October 2, 2011
Good:
-Dynamic story that let's you choose which character to play next, which isn't something you typically find in RPGs. Overall, the story is decent, if not slow paced at times with a few surprises here and there.
-A lot of characters to recruit, some of whom are more interesting than others. Yuber, Luc, Geddoe, and Viki are the ones that immediately come to mind.
-Three types of combat: duel, party, and army.
-Challenging boss fights for the most part.
-Castle can eventually be developed and it has some intriguing areas.
-Facial expressions are a welcome addition, though there are not as many portraits this time around.
-The theater mini-game is fun and dynamic.

Bad:
-The camera. Aside from a few outdoor areas you're given no camera control. This would've been fine in a 2D game, but it totally defeats the purpose if you're pushing for an immersive 3D world. It would have been better to remove all camera control and work on making the static camera angles better.
-Bland environments. I'm sorry, but passing by one tree per forest doesn't cut it for me.
-It takes as long as half an hour to travel across areas and the blinking mirror should've been introduced earlier in the game.
-Paired combat system is more annoying than fun. What happened to the fast paced combat from I & II? It makes no sense to have six people in a group with direct control over three of them. Why would anyone prefer this?
-Not as many mini-games as before, and most of them just aren't much fun. I liked the idea of horse racing but the gameplay was limited and the items and rewards not worthwhile.
-Lackluster music with a few exceptions such as the intro video.
-Too many army battles are scripted and automated. It's not fun to watch the computer fight with no stake in the outcome of the battle.
Load Comments (0)