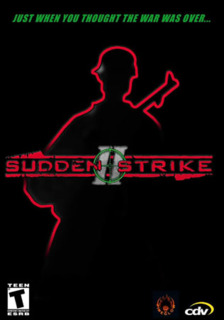 This game has it all.

User Rating: 9.8 | Sudden Strike II PC
By Mackan52 | Review Date: August 11, 2006
Sudden Strike 2 is a real-time strategy game with great gameplay, tanks are actual tanks that were used in WW 2 so is the AT-cannons, the airplanes and the artillery. The best part is that buildings and tanks don't get destroyed if you shoot on them with enough submachine-gun fire like in Red Alert or other games. The game is just great on so many levels because it's so autenthic and real-life based.

In one second you can turn a peaceful little town to a pile of rubble, dead soliders and destroyed tanks with a 88-Anti Aircraft gun. So you can really see where you have had your hardest confrontations.

Some say that the micromanagement is annoying, well i like it and i think that what makes the game great. I've sometimes accomplished more with a single Sniper aginst an enemy hardpoint then what i've accomplished with a full scale tank assult.

The other thing is that you have complete control, if your orders say to capture a town YOU decide HOW you want to capture that town. Flank it, bomb it, pound it with artillery, capture it house by house and so on.

The graphics on this game is just right, you get the feeling that you play with small scale models.

If you play the game you WILL enjoy it, just be patient.
Load Comments (0)