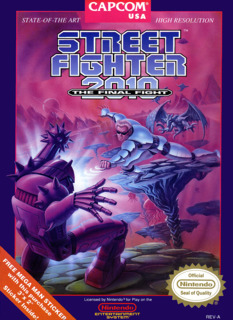 A strong departure from tradition, but still a good Street Fighter game.

User Rating: 7.8 | 2010: Street Fighter NES
By sieg6529 | Review Date: July 14, 2006
The title is confusing on 2 levels. It has both "Street Fighter" and "Final Fight" in the title, which has probably led to many wrongful purchases. Anyway, you play as Ken Masters again, this time in the year 2010 (I just don't see the future being that way in less than 4 years). His lab partner has gone missing and Ken is off to save him/her (I don't remember). Despite my wishes, there is not a single reference to any other classic Street Fighter character in the entire game, which could have added some depth to the experience.

Graphics: better than average, in my opinion. The whole game is very animated; enemies, environments, and Ken all were given some good detail. Some levels it seems like the whole screen is moving. Colorful too, which I appreciate on ye olde NES.

Sound: Again, better than average for an 8 bit game. I was very much reminded of Ninja Gaiden music, which is not a bad thing at all. The sound effects are well timed and not very repetitive.

Ken is certainly different than one would find in a Street Fighter "fighting" game. The only similarity is the blond hair. Other than that, gone are the flaming shoryuken and the spinning kick (I won't even attempt to spell that one). Now, Ken can deliver blasts from mere punches and has a sweet flip kick. He also has excellent jump and cling abilities. Put em all together and you have a platform action game that is oft-regarded as challenging because of enemy unpredictability. Despite this, I still say it is easier than, for example, Ninja Turtles or Double Dragon. There are lots of boss fights, which appealed to me.

Overall, SF 2010 is a good retro experience, if you can find it. I would love to see an updated version with more SF elements in it, but one can only hope.
Load Comments (0)