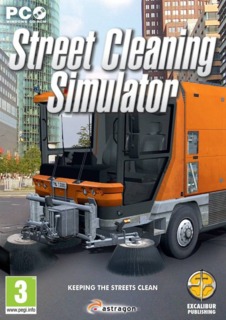 I will never play another video game again.

User Rating: 10 | Street Cleaning Simulator PC
By ggregd | Review Date: August 5, 2011
Once in a millennium, if humanity is lucky, a force makes itself known that elevates the human condition to a degree which we call transcendent. It goes beyond everything we know to be true, to reveal brilliant new truths. Some cannot comprehend, and must look away (Gamespot) while those who are open to nascent genius are purged of the darkness of ignorance and are elevated to lofty states of affective, cognitive and volitional consciousness far above those of mere mortals, yea, to touch the very face of God.

Street Cleaning Simulator is one such epiphanic force. One does not merely remove virtual dirt from virtual streets in this game. No, one breaks down the fourth wall and becomes part of the game itself. People walking the filthy streets disappear as you draw near - sucked whole into the street itself. You, the Street Cleaner, are not merely cleaning the road, you are also cleansing the very souls of these people. Allowing them to become one with the streets, and as my truck ran them over, to pass through the digital realm into this life. I could hear them, expressing their eternal gratitude to me as they were reborn into our world.

Vehicles become one with buildings. They fly into the air in exuberent joy as they connect. Colors change of their own volition. We can only hope Excalibur Publishing will deign to develop expansions such as Sand-Blasting Simulator, Floor Mopping Simulator and Paint Drying Simulator to allow us to free these benighted digital souls as well.

I will never play another video game again. They have all been cheapened in my estimation, to be nothing more than frivolous wastes of precious time. I am compelled to "play" this masterpiece in every waking minute, to the disdain of every artifice of "responsibility" that used to concern me in my former, so called, life. I pause only to write this review, so the rest of humanity might also know my joy.
Load Comments (0)