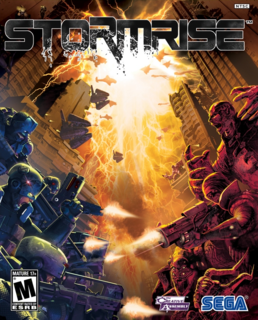 Buy this game its a real tester!!!

User Rating: 8.5 | Stormrise PS3
By speedie9372 | Review Date: March 30, 2009
I have been looking forward to this game for a while as i am a huge fan of rts and when i first put this game on i thought oh this aint going to be great, controls are way too hard but when i got to the 2nd level i started to get used to them and now i understand their logic in making the system they have used. I am loving this game now i think its amazing and i have played them all (RTS) for the consoles and this one is a real tester. what i really like about it is that u have to think things out instead of the big rush at the start. Population cap looks good for the game too, u get a lot of units if u want cause u will need them. Big units are cool too. Not worked out the best strategy for the game yet thats because this is a new style of play so is going to be interesting seeing how people work this one out. I havent even won against easy ai yet on skirmish so i have a lot of thinking to do. I am buying this for xbox as well so u can tell how much i love this game. just add ITAL1ANSTALL1ON if u want a game online with me on ps3 and G13 STALLION for xbox. catch u all later guys and girls
Load Comments (0)