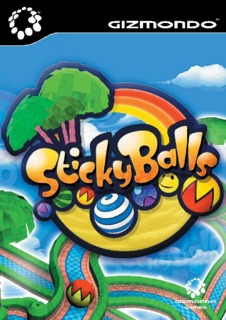 Is this the Gizmondo's killer app? No, it's more Meteos than Lumines. Will keep you on the Gizmondo until Colors? Yes!

User Rating: 8.7 | Sticky Balls GIZ
By gruntyking117 | Review Date: December 25, 2005
The Gizmondo isn't exactly 'big' right now. In fact, it's a tiny little speck on the edge of gaming. It lacks major support (EA is porting N-Gage titles to it and Microsoft hasn't released Mechassault yet) and the other companies that support it are kind of unknown to the world. Sticky Balls is one of those obscure, off-beat, titles that everyone who's played it raves about and others look at and twitch. Until they play it.

The gameplay of this title is simple to learn, tricky to master (it even says so on the box) and plays like a handheld game should. The premise is that you go around to strangely cute and colorful tables to round up all these 'sticky balls'. How you do it is that you have to play a similar game to pool, except instead of trying to rid the balls in the sense that you sink them, you stick a group of seven (or every one of the same color on the table) and then the blob disappears. That's just the beginning, though, seeing all the power-ups, bonuses, different effects and all mess with the game. In a word, it's genius, yet no one will appreciate the studio's effort.

The graphics are the game's weak point. While bright and cheery, the balls themselves seem 'flat' due to the use of pre-rendering. Everything is smooth, but sometimes (especially during big combos) slowdown occurs.

The sound can range from the cheery facet of the game to a strange intro video ( had me laughing everytime, though) that gives your goal via singing balls.

For twenty bucks, it's not a bad deal, in fact it's one of the reasons to own the Gizmondo. If you have the system, then you MUST pick this up.
Load Comments (0)