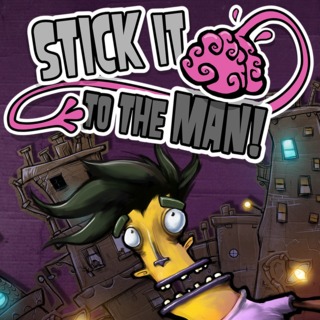 Stick it to the Man!

View the original review at http://matthewleblanc.net/?p=1908

Experience with Stick It to the Man (PS4):

I really didn’t know what to expect while Stick It to the Man was booting up. Being a Playstation Plus member, I downloaded it for free and, to be honest, I probably wouldn’t have played it otherwise (I’m a horrible person for not supporting indies as much as I should). I saw the trailers and will admit that I was intrigued by the oddball sense of humour the game is going for, but I knew the experience would be a roll of the dice.

For those unsure what type of the game Stick It to the Man is, I would categorize it as a side-scrolling story puzzler. Don’t expect the gameplay to push you to your limits or bend your mind in insane ways. This isn’t a hardcore puzzling game. Instead, it’s very relaxed and meant to be enjoyed like an interactive movie rather than a typical platforming game.

Stick It to the Man has a lot of charm that it flaunts right off the bat. The sticker-like world the 2-D characters live in and the dark humour mesh really well together to create a memorable art style. The game had me laughing quite a few times, although some of the jokes are a bit contrived. My favourite bit has to be with the seagull and the fish late in the game. Never has a seagull been depicted as the glutton it actually is in gaming.

The entire game is voice acted, which, in my opinion, makes the game what it is. Without the voiced dialogue, the game would seem a bit flat and lifeless, especially since you’re reading people’s minds the entire game. The voice work really makes the characters who they are. It’s a bit over-the-top and, at times, grating on the ears, but that’s part of the fun. As a word of warning, my fiancé was around a few times while I was playing and she asked, “How can you play this sh*t? It’s super annoying.”

The game took me five hours to do pretty much everything. The game would be even shorter if you didn’t bother to listen to all its denizens. For free, I can’t complain. For $15, consider it a night out at the movies. It’s a game worth playing simply for its quirkiness or for those looking for something light to tide them over for the next big triple A title.

Load Comments (0)
Where to buy
Stick it to the Man!
$19.99 at Bestbuy $19.99 at Walmart
GameSpot may get a commission from retail offers.