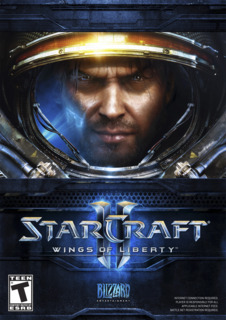 For hardcore gamers, not "just playing to play" gamers...

User Rating: 7 | Starcraft II: Wings of Liberty PC
By hot_dao | Review Date: June 26, 2013
Everyone who ever played Starcraft seemed to of had certain expectations of this game--I was disappointed. This game was somewhat stressful; I don't play games to become stressed...

I never really liked Warcraft but I did like Starcraft. However, with this addition, it felt a lot like Warcraft than the old Command and Conquers. You have to memorize the hotkeys for the abilities and etc. if you want to be slightly successful.

The biggest thing I hate in strategy games is resource management. Like Warcraft, units cost a lot of resources, thus, meaning that you actually have to think of the types of units to create to be efficient. This game seems to be built for quick, fast paced games that last about 15-20 mins which isn't what I am looking for. Unlike Starcraft II, in Starcraft I, you actually had the time to build up your base and etc. but in the new Starcraft, I always felt rushed to do the first attack or ignore defensive buildings and create offensive units/groups. Defensive buildings have become incredibly useless in this game, even a few of the first-weakest units can take one down in a few seconds.

I guess what I am looking for is something more like Rise of Nations where resources aren't a worry as they don't deplete, units don't have a huge advantage over another, and every building has a purpose.

I would not recommend this game to non-hardcore gamers unless they are used to using hotkeys.
Load Comments (0)