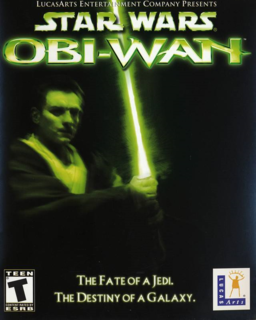 4.6
Poor Check out the review

User Rating: 8 | Star Wars: Obi-Wan XBOX
By ShooterFreak64 | Review Date: December 3, 2009
I have no idea how this game could have possibly gotten under a 7. The game play in this game wasn't perfect but it was sure fun to play. I played this game through about 2 times and was satisfied all the way through. The visuals aren't amazing, and theres a few faults here and there but the game is definantly a must for any Star Wars fans. They introduced a control system for the lightsaber using the control stick. You move it left it swings left and so on. It feels great and after a thorough training tutorial you have every little control there is to know in your head and ready for what the game has in store. There is a variety of enemies, maps, ways to kill your enemies, and force powers at your disposal. Some enemies may be a bit hard for some people but after a few tries you can surely have them beat in no time. Some noticable faults in the game i can think of on the spot are the graphics and the voice-overs. The graphics on the environment is not that bad but the graphics on the people and characters is really...corner-ish? Kind of weakens the gameplay but its the original Xbox. It can't be perfect. The voice-overs, Obi-Wan's voice is very, very off to the voice in the movie. Everytime you press the action button when there is no action to perform he says, "I'm not sure." but it sounds more like, "am not shooa." Apart from that this game is really well done in my opinion and deserves to be enjoyed and played through.
Load Comments (0)