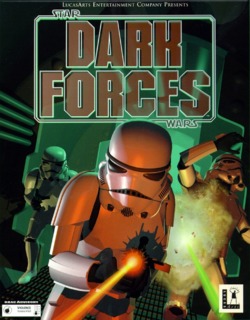 It may be old, but that never stopped Doom from being good either.

Yes, Dark Forces is an old game. Does that stop it from being good? Of course not!

The gameplay is still fun. Classic level design (the deceptively simplistic type of level design that's found in old games and seems weird but awesome today) mixes with the first real use of puzzle-solving in a shooter game. Dark Forces, I believe, was the first game that featured multi-level structures, jumping, crouching, and looking up and down. The controls are severely outdated and it's a pain to actually re-configure them, but after 20 minutes or so of playing you should get used to it. Otherwise it's a simple, classic shooter/puzzle game. The levels are extremely linear and the game has no AI to speak of (with the number of enemies increasing for the difficulty levels instead of getting smarter) and the campaign in extremely easy. After playing through the campaign 50+ times, you memorize every hallway, nook, corner, cranny, enemy position, and secret area in the level, and after that the replayability goes sharply downhill due to the lack of multiplayer, and I was able to burn through the entire campaign on hard difficulty setting in one 8-hour sitting.

The graphics are obviously severely outdated for today, but for the time they were average. The giant square pixels that are visible everywhere can be distracting, but it's easy to see through the bad graphics and enjoy the classic gameplay. I left the sound at a 7, since it's been a long time since I've had a bad enough computer to hear the sound, but from what I remember the music was simply Star Wars music and the voice acting was bad with normal gameplay sounds.

So, overall, Dark Forces is a classic shooter/puzzle game that can still be extremely fun. It was also the first game to really expand upon the original Doom formula. So if you enjoy old-school shooters, haven't played this game, have $5 to spare, and know a good bargain bin store, go ahead and pick it up.
Load Comments (0)