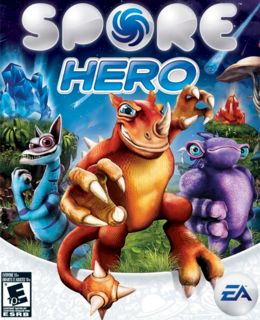 A great game that needs to be improved.

User Rating: 6.5 | Spore Hero WII
By epicman11 | Review Date: February 19, 2011
When I first saw this game I wanted it because 1. I haven't played the spore series because of my computer and 2. I heard that the spore games were really fun. When I heard that there was a spore game on the Wii, I read some reviews about it and I decided to buy the game. Once I got the game I started playing and I wasn't as thrilled playing the game as I though would have. You start out falling to a planet. There are red rocks falling from the sky and the aliens (or whatever they are) are hypnotized from the rock. Somehow, you are immune to it and your the only one that can break the red crystals. That's pretty much the whole story. In the PC version, I heard that you can shape your spore anyway. But when I went to a nest to customize my spore, I had to choose from what shape my spore would look like. They are also many lame mini games that made me ticked off. I would of rather had no mini games than the lame ones they give you in spore hero.There is something cool called the sporepedia where you can make your many spore characters. You can use them in multi player, but I find multi player boring. All you do is fight in a little tiny fighting spot and start beating up your opponent. The main thing that ticks me off about this game is that there is no online! This would have been a great game for playing online. Instead of showing off your spore to the world, you can only share with your friends(or your can invite the whole world to your house to show your spore off).The only good thing are pretty much the graphics. I think that they are great. I think that this game is worth a buy if you can find it for $10 like me. But if you cant, then you should rent this game and then decide on buying or skipping. I think this game deserves a 6.5/10. This is definitely a game that could have been better.
Load Comments (0)