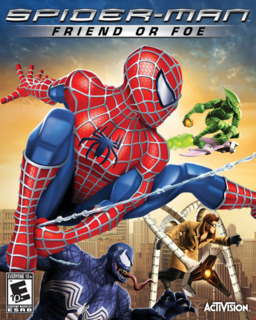 User Rating: 3.5 | Spider-Man: Friend or Foe PSP
By ivansword | Review Date: October 9, 2007
Dont play this game. This is the most monotonous,, boring, repetitive, game I've had the displeasure of playing in some time. Here we have a great idea; fight your enemies, team up with them, and kick some @$$. Sure sounds good. Nope. This is a run into an area, fight some enemies (with some button mashing and horrible collision detection) collect some stuff, break some containers. Rinse and repeat. The difficulty is completely eradicated by the fact that you never really die, just wait awhile for you character to 'come back'. Even the enemies are almost always the same (given the area youre in). To top it if, your teamates are lackluster in playability, the story has been dumbed down from the consoles (wait does this version have a detailed story?). On a positive note, it does have SOME of the pretty cgi scenes, but lacks everything else. Even the controls/combos have been changed from the console versions. I know, I know, this is a version for a system on the 'go'. Just dont go playing this, I'd save you that pain. Another highly disappointing Spider-man game that had some promise. Maybe I should just stop hoping for a good Spider-man game.... (like the psx days)
Load Comments (0)