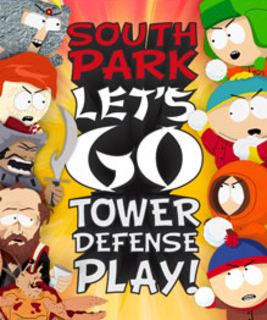 Even if your not into Tower Defense games, you will still enjoy this hilarious and fun trip through South Park.

User Rating: 8.5 | South Park Let's Go Tower Defense Play! X360
By tntkng | Review Date: May 5, 2010
I have been a huge fan of South Park for a few years now and I have seen a lot of crappy games made that revolve around the show. I can safely say that this game changes that and gives me hope for future South Park games.

Story: Well there isn't much to the story and its probably the weakest section of the game,but here's a quick rundown of it. Evil forces (aka: Gingers, Hippies, Cows, Gnomes, ect.) have banded together to try and destroy the town of South Park. You will play as Stan, Kyle, Kenny, and Cartman through several stages, ridding South Park of these horrible villians. There isn't anything else to the story at all, but what is there at least explains why you are defending South Park.

Graphics: The game uses the animation of the show to its advantage and accurately re-creates the town of South Park. You will see gingers explode into little bits and hippies eyes fly out of there heads, you can tell the people who made this game paid attention to all the show's over the top violence and gore! The anime style pictures used to tell some of the story before each level are also done nicely and in my opinion lend to the games stylish look. Overall this game looks great for a downloadable game and the art style resembles that of the show's very nicely.

Gameplay: Now the game can be tricky to get used to if your not used to playing tower defense games,but once you get the hang of things you'll be killing gingers with relative ease. The controls are pretty straightforward and should be pretty basic for anyone that knows what a 360 controller looks like. Another cool thing I loved about the game was that the towers you will use in the game can be upgraded for a certain amount of coins. This adds some much needed depth to the game and helps make for some interesting strategies! For the first part of the game you will control only one or two players,but when you get to the 3rd stage you will start using all four boys. It can be somewhat of a difficult task to manage all four boys in the later levels,so its obvious this game was made with co-op in mind. Having said that co-op is the best way to play this game! Overall the controls are simple and easy to get used to, yet the game is challenging enough to keep you interested for at least a playthrough or two.

Value: When I first saw this game at $15 bucks it scared me away, but I waited for a price drop and got it for $5.00. I wish now that I had gotten it for $15.00 and not have waited so long to play it! The game has tons of value. There are tons of unlockables, including: Video clips from the show, character bio's, and achievements. Some of the achievements are very hard to get meaning that you will want to play the game more than once to get them all. I played through the game once and I'm going back a second time for the rest of the unlockables and achievements. Overall $10 bucks is a fair asking price for this game, because of its well of content that should keep you busy for a good 20 hours or so.

The Final Verdict: Overall South Park: Lets Go Tower Defense, isn't the most innovative game ever,but its huge amount of content and fun addictive gameplay will keep you playing for a long time! The value is great, the graphics are wonderful, and the fan service is incredible. This game is an example of what future South Park games could accomplish and hopefully will.