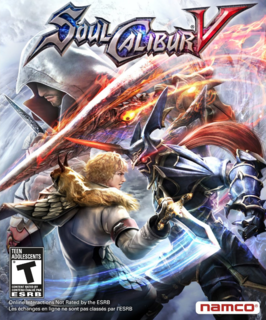 They should have waited a little more.

User Rating: 6 | SoulCalibur V X360
By AlvMar | Review Date: February 19, 2012
When you have a game series going on, best thing, in my opinion, is to compare it to the previous ones. In this case, i'll compare it to the Soul Calibur 4, since both games have very styles. The very best way is to divide it in categories and then we'll see if it works, if it's better o if it's worse.

CHARACTERS: As usual in a fighting game well known like this one, you have to keep most of your popular characters in it (like Taki, Ivy, Sophitia, Nightmare, etc) And since they don't want to make them too old, they just kept their fighting styles into new characters that were related to them. Or so i think. Just because they have the same style, does it mean we have to assume they are related? Yes? No? I don't know! They kinda... don't have a storyline, well, except for the brothers... which kinda suck. In SCIV, they were a lot more interesting for one thing that'll be my next category. In terms of gameplay in SCV, however, for me, these are easier to get used to. Maybe with a little button smashing you can end up learning some combos or even creating them, which is always nice. The roster is also bigger (two more fighters...yay)

STORY MODE: Waaaaaay too short and it's focused one the new characters. Now, they are the son and daughter of Sophitia, the main character of the first games, but i couldn't care less about them. They are boring characters and way too framed. It would be interesting if the story was longer (20 chapters? Really? I won that in an hour and a half). One cool thing fighting games should be including in their story modes is the chance to use your created character. Oh wait, SCIV did that! And it may have been repetitive after a while, but for the most part, it was fun. I always like to see a character i created in a cutscene. It feels great.

Now, the story mode, as i said, is only abut the brothers and you use them for the most part (there are a few chapters where you use Z.W.E.I... a couple, actually) What about the rest? No endings? No storylines? Am i supposed to play a previous game to understand them? Because.. that would suck... HARD. The story mode is one of the best parts of a game and these one is really weak.

OTHER FEATURES: On a fighting game nowadays, there are some modes you can't avoid: Arcade, Versus, Online mode and Training. You miss one of them and your game is destined to be bad. Now, what do SCV adds besides that? A hard version of Arcade and a mode called Quick Battle that will just earn you some titles you can use online. Then? Nothing, that's it. I think they are trying to imitate Capcom and they fighting games with almost no features. yeah, yeah, the online may be awesome, but still, if you don't have a good offline base, your game becomes boring pretty quickly.

DIFFICULTY: This may become a little different. I'm not against difficult games and yes, i can become HULK angry when i suck, but i do respect a game for it's difficulty. But this is a little different. When you fight Kilik or any character in the hard arcade mode, you will break your control because there is nothing you can do to win. As i said, it's not bad to have a difficult game, but this waaaay to much for new players. If you don't have enough features in your offline mode, the worst idea is to make the game harder, since some people will just get tired of it and leave it on it's own. Nobody want to play a game they can't beat. Sure, it may be challenging but if it's waaaay to hard and after thousands of time you're still on the same spot, chances are you are gonna get tired and bored. But this is the only point when many will want to discuss since the difficulty depends a lot on the player's ability. In my opinion, compared to SCIV, it's way too hard.

To end this,i think they should have put more effort on it. I feel this game had a lot of potential, but maybe they wanted to get it out as fast as they could and couldn't develop any more. Not the best choice. Now, it's not a terrible game but i'm sure many will get tired of ti pretty quickly besides the online game mode.