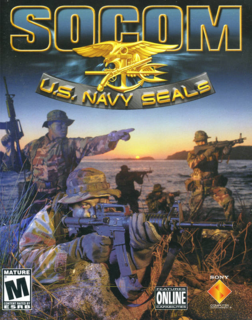 User Rating: 9.7 | SOCOM: U.S. Navy SEALs PS2
By OvK | Review Date: August 4, 2003
I bought SOCOM the day it came out, and it's been my favorite game since, despite the fact that I never even touched single player til 2 days ago! The multiplayer is that good... well, it used to be better, but due to a rampant amount of cheating, it has suffered. Despite what people say, the multiplayer is still very playable and it is possible to get into multiple games without seeing a single cheater. And when you do you're in for the best multiplayer to be found on any console. Cheating aside, multiplayer levels have quite a number of glitches, but the game is still fun. Like I said, I've played it since day one, so I've seen the multiplayer game go through many phases. With SOCOM 2 on the way, you might want to wait until the original goes down a little before purchasing the original. I noticed quite a few reviews that mentioned a lack of checkpoints or the ability to save during multiplayer missions and I can't really understand that, but thats probably because it didn't take me more then 20 minutes to beat any of the missions, but thats probably because I've played multiplayer soooo much. I'd just like anyone reading this to know, that if you have any hesitation about getting SOCOM, you're crazy! The game has a single player game that can be quite cool, with a multiplayer game that is friggen awesome!
Load Comments (0)