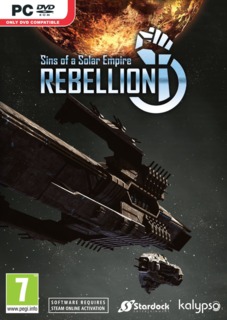 User Rating: 8 | Sins of a Solar Empire: Rebellion PC
By Torino818 | Review Date: August 3, 2012
This is an amazing series, I have played it since the release of the original Sins of a Solar Empire. I have all the expansions for the original and unfortunately this is more of a repack than a completely new game.
The New: Some things are completely fresh to the series, you have a new class of ship called a Titan that is basically a mobile super dreadnaught, it kicks ass and takes names in almost ever battle. However it can make the combat one sided, I sent a titan alone against a fleet of thirty frigates and two capital ships and won easily. You also have six "new" factions (loyalist and rebels of each race) to the game but its the same factions as the original with updated tech trees depending on whether your loyalist or a rebel. Each faction has its own capital ship and shares frigates/cruisers/capital ships with the opposing racial faction. The research trees vary a bit from loyalist to rebel but not too much.
The Old: All three races make a return, the Traders Emergency Coalition (TEC-humans), the Vasari, and the Advent. All of them have fractured into Loyalists and Rebels but for the most part are similar with slight variances in diplomacy and combat bonuses. The tech trees have been modified but still have most of the big items (i.e. super weapons) from the original game. All of the original ships make a return, as well as the starbases, defenses, and diplomacy options added by the earlier expansions. The graphics also seem untouched but they were beautiful to begin with so no complaints there. The interface has become a bit more complex, but not to the point of being to taxing. Those of you that have played the original will find it almost the exactly the same and new players will find it easy enough to use the interface.
All in all the game is more of an expansion on the earlier expansions. The real problem with this game is that it could have just been an expansion instead of an entirely new game.
Load Comments (0)