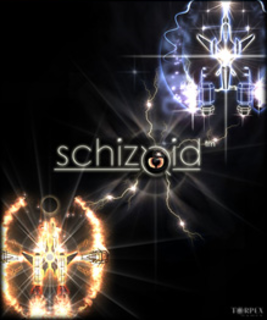 Schizoid was made with Microsoft's XNA tools and is focused on cooperative play.

User Rating: 7 | Schizoid X360
By frogsoblivion21 | Review Date: July 21, 2008
Schizoid is a unique game from Torpex Games that's guaranteed to make your brain scream. On paper, Schizoid is a mix of Ikaruga and Geometry Wars. While this isn't a real twin-stick shooter, you will have to play it like one. The concept is simple. You have two ships - one orange and one blue - and can only destroy the same color enemies. You'll have to take out every enemy in the level to continue. It can be pretty fun, provided that you're playing with a friend.

You have two options on how you want to play the game - single-player or cooperatively. The single-player experience brings you Wingman Bot Training, which lets you control the blue ship while the AI controls the orange one. This mode is only good for a tutorial, as it's not likely you'll want to finish every level with the not-so-smart AI partner. When the AI partner has nothing to do it'll stay still; when it's in danger it just seems to stick against the wall, which is where it tends to die a lot.

Uberschizoid mode is where the real challenge waits. You'll take control of both blue and orange ships with the two analog sticks. This is probably one of the hardest things you'll do in a video game. There will be two lines coming from off-screen to help indicate where both of your ships are. It's fun to try it, but unless you're some two minded freak, this mode will drive you crazy.

Since this game was made with co-op in mind, this is the best and easiest way to get through the game. There's over 100 levels to play through, which get harder as you play on. While the level design is basically the same, the enemies will keep you from getting bored. For the first 26 levels the enemies are pretty simplistic. At level 27, you'll encounter an enemy that lays eggs of the opposite color, and if you don't dispose of the eggs quick enough they'll hatch, spawning more enemies for you to deal with.

The visuals are what you'd expect from an arcade game such as this. The levels have a psychedelic touch to them with some techno-esque music thrown in to round out the effect. In various levels you'll find items to help you take out enemies. Both ships must make contact with the item to activate it. Some of the items include a bomb; which takes out nearby enemies, and a razorwire; which has a connecting wire between the two ships and kills anything that gets in the way.

In the end, you might not have too much fun with this game if you're not playing with a friend, but if you're playing co-op you'll have a blast. Schizoid was made using Microsoft's XNA tools and the finished result is pretty impressive. With the game only costing 800 Microsoft points, ($10) you'll get a game with a lot of value - just keep in mind that this game is focused around cooperative play.
Load Comments (0)