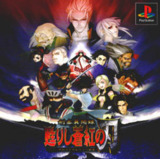 Questionable risks taken during the development of this game proved to be detrimental in the end.

User Rating: 4.5 | Kenkaku Ibunroku Yomigaerishi Soukou no Yaiba Samurai Spirits Shinshou PS
By cigarcat | Review Date: February 13, 2013
2D fighting games are often very similar to each other due to the "if it aint' broke, don't fix it" mentality. Mucking with the formula is a risky decision which in the case of Samurai Showdown: Warriors Rage didn't quite pay off. The failure of this game makes me particularly sad because I remember immensely enjoying the original samurai showdown on the Genesis during my childhood.

Firstly, the graphics are really bad. The visuals consist of blocky 3D rendered fighters with 2D mildly animated backdrops, neither of which look very original or interesting. As for the sound, it is adequate during combat though the voices are all in Japanese and most of the rendered cinematics don't provide subtitles leaving the already confusing and seemingly lazy story lines even more indecipherable.

The story itself is quite bland and at times leaves you scratching your head trying to figure out each character's motivations though to its credit each character has a unique and lengthier storyline than most other fighting games. This combined with being able to unlock more characters and content with multiple play-throughs makes the story mode this game's most appealing feature

The most important aspect of most games but especially fighting games is the gameplay. If a fighting game is fun and balanced then most other features can take a back seat. This game doesn't offer much variety in the different moves and combat is pretty generic as well. The fact that instead of traditional rounds each fighter has multiple health bars makes mounting comebacks more difficult which was not to my liking. This is especially frustrating when challenging the final boss and the same rules don't apply to him as he cheaply double dips into your next health bars during the same combo, sometimes killing you in one infuriating attack!

Ultimately I can't recommend this game to anyone even the most forgiving fighting fans since there are so many better 2D fighters on the Playstation. Consider Street Fighter Alpha series as well as Guilty Gear and Jojo's Bizarre Adventure for alternatives in the 2D fighting department and the Bushido Blade games in the 3D department. All those games are fantastic.
Load Comments (0)