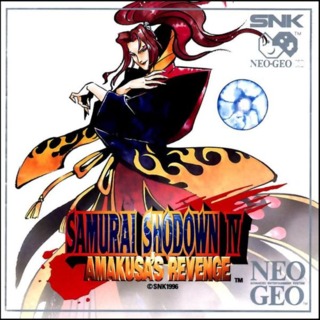 Samsho IV is so gorgeous that simple words can't describe it! Just play this instant classic game! You will love it!

I have always liked Feudal Japan and so it's now. Samsho IV is easily one of the gretest fighting games I have ever played in my life. Everything is awesome in this game, from outstanding fighters to amazing atmosphere, story. The whole Samurai Shodown series has huge potential and fortunately SNK have used this potential in 100%.

Samsho IV tells us the story of warriors who have to stop the evil Amakusa, who wants to take control of the world and destroy it. So we have the battle between good and evil. Someone can say that such a story is unoriginal and boring, but believe me it's not. We've got many great characters to choose and everyone will find his own fighter I'm pretty sure of it.
My favorite is Haohmaru, he's ronin and also he's funny (I love that kind of characters like Haohmaru). Each character in the game has his favorite weapon, fighting style and combos, even his own story so it's awesome!
The battles in Samsho series are in 2D, but they are extremely cool. Before each battle the map of the land is showing us the location of our next fight. Also, before each battle characters make a short speech. We have some kind of fatality in Samsho, this is when we defeat our opponent we can perform deadly combo, which slices our opponent to pieces, it's very brutal.

The graphics in Samurai Shodown IV are very good and I must say that I really like it. The environment is very detailed just like the characters. For example the village in the fire looks great, but all locations in Samsho IV are fantastic.

I simply love the soundtracks in Samsho IV. Feudal Japan music is gorgeous and very atmospheric. Music really suits to the locations, and each character in Samurai Shodown has his own main theme. The fighting noises are realistic and cool.

Overall Samurai Shodown series is amazing and awesome! It has many fantastic characters and I'm sure you'll just love this title. Easily one of the greatest fighting games ever made! MUST PLAY! ;)
Load Comments (0)