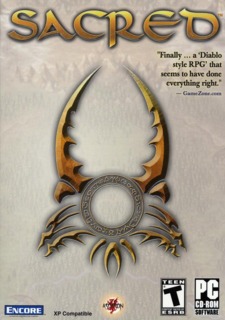 A good expansion to an already great game can only be nice, right?

User Rating: 7.5 | Sacred Underworld PC
By ChristianKiss | Review Date: February 6, 2009
Sacred is a pure Action RPG that allows you to play with six unique characters. By upgrading to Sacred Underworld you add two more heroes: the Daemon (a hybrid of knight and demon) and Dwarf (a warrior that uses powder weapons). Each one has different Combat Arts and skills, been the latest the generic abilities, such as Weapon Lore or Magic Lore, respectively used to increase weapon damage and spell power. Two or more heroes may share skills between them. For example: Gladiators, Wood Elfs and Dwarfs already come with Weapon Lore. Your abilities are increased when you level up your hero. To the contrary, Combat Arts are improved by learning from runes found in dead opponents or after accomplishing quests. For example, one of the Dwarf's attacks called Cannon Blast, which is developed only if you find the corresponding Cannon Blast rune. Leveling up your avatar doesn't add points in combat arts, meaning that the development of your hero depends on a bit of luck to find the needed stuff.

In the Underworld expansion you'll only be able to play the new campaign if your hero is level 25 or above. If you never played the game before and want to see the new content, the game already comes with a Daemon and a Dwarf to choose, both on the required level. You start the expansion in continuity to the ending of the original game, after you've defeated the Sakkara demon and his conjurer. In this add-on you'll have to save baroness Vilya, a known character from the first game, now captured by an evil entity.

Here goes a list about some of the nice concepts I found in Sacred Underworld: 1. Ancaria is a huge world, and with the expansion set it becomes even larger. The different scenario settings add fun to the game, and you'll find that exploring the numerous natural places of Ancaria is particularly interesting; 2. Eight singular classes, allowing different combat art combinations and characters builds; 3. Good multiplayer support for competitive and cooperative games. Playing on Hardcore with teams is definitely a nice way to enjoy Sacred; 4. Probably the best 2D graphics out there, although I found the zooming feature a bit difficult to get used to. It seems that the camera never is in the right angle, although after some hours I preferred to let the farthest vision of the screen; 5. An impressive menagerie that keeps you interesting while visiting the different scenario settings in Ancaria. Expect some serious big monsters around, and don't forget to pay attention to the nice animation they all have, especially when you gib their heads. =)

If the character customization wasn't enough, Sacred Underworld also delivers a mighty blow on most similar games when comparing them with the huge selection of the arsenal available in this one. The coolest part here is to find the perfect set for your character build, and differently to Diablo II and Titan Quest, you'll find the set pieces pretty fast. It's depressing when you have to spend a lot of hours to find just one special item, but in Sacred this stuff is quite easy to find. Ascaron certainly knows what fun is all about!

If you think that this game is too easy, you're right. Although it features five difficulty levels, your character is always overpowered if you develop it right. This isn't really about surviving; it's about how faster you can kill the pack of goons creeping around.

But not everything in Sacred Underworld is sunshine and rainbow. The game fatally becomes boring over the time. This may sounds ironic to me because I love butchering monsters, but in this game this concept is taken to the extreme. Every step leads you to a struggle against five or six opponents at a time, and traveling through long distances may be a pain.

The side missions are also a drawback. They are just too simple and generic, and you really don't need to complete them all. It's so frustrating to finish a quest and earn only a common item or some little gold as a reward. Nevertheless, don't get it wrong: Sacred Underworld is so good that you can easily overlook this issue.

Another annoying problem is your gold, which is almost useless in the entire game. You cannot buy sets or unique items from the merchants, neither the so important runes to improve your Combat Arts faster. You can only find these things after looting corpses, which makes gold a futile thing for your character. It could be nice if the Trading skill allows you to, at rare occasions, find the top stuff in merchants for a very high price.

I can't forget to mention that the items, such as armor, weapons, rings etc., aren't visually very different from each other. You can find a sword that deals 1000 of physical damage and another one that deals 200 of physical damage, and they may look exactly as the same weapon. A bit of variety is something that the Underworld add-on could've been improved.

As I said, surviving in Sacred is pretty easy. Your avatar becomes very powerful just too early, and the hordes of enemies will not add any difficulty. If you were coherent while selecting your skills and Combat Arts, you'll find that your hero is just trampling your enemies like they were ****. It's still fun for the most part, but it may become boring after a while. In general, you'll find that spell-casters alike are often far better than melee builds. They'll never miss a target with a spell (unless you can't point the mouse properly), while melee and ranged characters can miss due to the "attack vs. defense" thing. But this is only a temporally problem, because sooner your melee or ranged character will reach high skills levels that greatly improve your attack rating. It's just a matter of time to end the unbalancing issue between melee tanks and magicians.

Sacred Underworld still has bugs, even with patches applied. I noticed some annoying problems with stability and gameplay in earlier versions; however the last update (so far v2.28) will correct almost all of the issues. But we've waited a long time for this one...

Ascaron missed the opportunity to improve the gameplay mechanics with the Underworld expansion; they preferred to just add some content to the original game. The biggest problem with this game is the dull moments, although you can ease this problem by playing with some friends on-line. There're many games mimicking the Diablo's formula, but Sacred Underworld effectively managed to shine over its competitors.
Load Comments (0)