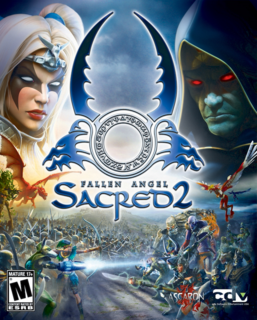 A fantastic game with amazing graphics that will grow on you, if you let it.

User Rating: 8 | Sacred 2: Fallen Angel PC
By vegard1985 | Review Date: June 14, 2012
I was playing Titan Quest again yesterday, and started thinking about what Sacred 2 might be like, since I had never tried it. I love these kinds of games, so I immediately hopped on here to read GS's review and to get a general idea of the game.

I liked what I saw and went ahead and got it. The game itself is really big, with the elite textures pack (available on collector's edition only) takes 7 gigs, on top of 13 gigs at default, making a 20 gig clean install (with high-res textures) the biggest stock game I've ever seen.

And with everything at max (elite textures included) it runs at a relatively stable 60 fps (locked by v-sync). However, I think my ram (and probably hard drive, lol) bottlenecks the system, since it'll jerk around a little bit. Without elite textures enabled it runs flawlessly.

Enough of that. My first impression was pretty special. I started a Dryad (hey, they looked hot and I love Druids) and watched the fairly epic cinematic, after which I was placed on a beach with a kind of a mentor beside me. I guess the gods didn't smile upon him on that day though, because somehow I ended up having to tutor myself. First thing I noticed when gaining control was the graphics. One word. Wow. They are incredible, and the attention to detail is pretty much un-parallelled. Leaves being side swept, a little bird making his nest - hundreds of small things that leave you with a warm and fuzzy feeling inside.

The sound is good as well, although the voice acting is bad. Not terribad but bad enough that you treasure the fact that only the main quests have voiced dialogue.

Moving on; the classes in the game are innovative and fresh. Whoever saw an ancient Egyptian-inspired Anubis-like robot thingie before as a class? Packing an alien blaster along with his hammer no less. Very fresh, very fun.
You diversify a bit by choosing a god and one of two campaigns (good or evil), which adds a good deal of replayability. Rather annoyed by the fact that you can't select gender for the classes though. 2-3 years ago I never touched any female class, for some reason. Thankfully I outgrew it, or I would have missed out on half of this game.

The story seems very weak, but the focus doesn't really lie there either, as it gives you (I'm guessing thousands) side quests left and right. In fact there are so many, I find myself skipping half of them. They're kind of like MMO quests in a sense. Very generic, a silly story behind it and mediocre rewards. But it works, somehow. In one early side quest though, you are pitted against the game's first boss. This was a pleasant surprise - as once you engage a boss monster, the camera centers on the boss and the game spits out some cool music. He took a serious pounding too, so it was a good moment.

The difficulty level when playing Bronze is extremely easy the first 2-3 hours. I considered re-starting several times and selecting Silver instead. But it's gotten more challenging.

The one big negative thing so far - I live in Europe and naturally wanted to play on EU servers, but that was a no go, since Steam only gives out US keys. Which brings me to the problem; there are apparently zero US servers. Nada. Zilch. Seems Ascaron went and got themselves bankrupt, and was forced to shut down their US servers. EU is still going strong though. Guess I have to buy a new, physical copy.

All in all though, great game. Sort of a diamond in the rough but if you can see past some bugs, crashes and general hiccups, you may find yourself in love with this game.
Load Comments (0)