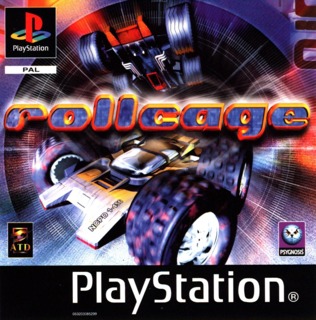 Rollcage is an extremely cool arcade racing game with a lot of action & fun on multiplayer split screen!

On brief RollCage is a marvelous game for multiplayers(SplitScreen)!

All About This Game:-

Game Modes:
Players take on the role of one of a handful of slightly mad car pilots. The cars they drive aren't your dad's Oldsmobile, by any means. In fact, they're more along the Mad Max line of thinking. But even better. The cars are more like turbo-infused indestructible tanks designed to withstand any damage done to them and drive against the forces of gravity. Players choose from a handful of racing events. Championship mode tallies an aggregate of points over a series of races, and enables racers to open up new circuits. Players can also go against a timer, and then vie against their ghost cars afterward. And head-to-head play enables up to two players to play split-screen. This is where the real excitement takes place.

Gameplay:
Folding battle action and racing into one seems easy enough, right? Well, as the great Jeff Chen once said, "yes and no." Apparently ATD liked the over-the-top lighting effects and killer weapons from games like Bloody Roar and N64's Turok, so it wove them into Rollcage. Gamers can pick from a dozen or so cars (fewer at first), each with distinct characteristics (handling, acceleration, grip, top speed, etc) and a polygonal racer (all purportedly of devious background), and then head out into the race. You'll vie against as many as seven other cars who are bent on your destruction and who have equal access to a slew of weapons.

Almost immediately glazed blue swirls (i.e. power-ups) appear in the road to assist in taking the lead. The power-ups range from super boost to a homing missile that targets the lead racer to slowdown to a rain of bullets, time warps, missiles, and electrical bolts, among a parade of others. Like Mario Kart, these aid in your cause, but can also be used against you. Knowing how to handle powerups, discarding them or saving them until the last few seconds, or using them in the wrong turn, can make or break you. It's a skill that's easy enough to learn yet takes time to master.

The other key element to mastering Rollcage is learning the courses. In any racer, it's important to scope out the circuits, but it's especially crucial in Rollcage. Because the cars can drive upside down, sideways, or whichever way, the courses are designed to take advantage of this killer attribute in devious ways. Powerups are located on the tunnel walls, ceilings and in secondary pathways. Sometimes split paths don't always end up in the same places, such as one latter course that forces the racer to hit a jump perfectly or hit a dead-end, and essentially end his or her race.

One last aspect of the game that really separates it from the rest is the cars' indestructibility. Lined along the courses are skyscrapers, factories, houses and other annoying obstacles - and each of them is fallible. The cars may hit a jump, soar through the air, and coming crashing down onto a 20-story building, and it won't even scratch your car. But the building will tumble to the earth and may even cause other cars to slow down, too.

Graphics:
Even with as many as seven racers on screen at one time, buildings collapsing, and lighting effects charging the air, Rollcage has to be one of the best programmed games around. It's solidly built, with no clipping, no seams in the roads, and almost nil slowdown. The cars in Rollcage move remarkable fast, due in part to their compact design but also due to ATD's determination to keep a consistently high frame rate. This racer burns down the road. The courses also reflect a wide variety of off-earth courses. Drivers race across lava-torn planets, icy-cold snow courses, and a mix of earthen and strange, alien weirdness. The particle engine renders up realtime smoke, extremely realistic sparks (also seen all over the menu design), and effective fiery explosions.

Compact as they are, the vehicles look like a military fanatic's dream vehicle. The cars are made of huge rims and wheels that are taller than the cars themselves. Essentially, these vehicles appear like sleekly modified tanks, tailored to achieve extreme speed and maneuverability.

Overall, the worst thing about Rollcage is that it's only two player, which is hardly a complaint given that most PlayStation games are one- to two-player. But wouldn't it be great if...Oh well...Not to be forgotten, the single-player mode is fantastic, but it's the two-player mode that'll have you jumping around like a nerd on coke and pop-rocks. It's an instant immersion into adrenal levels of ferocious competition. If you haven't already figured it out, Rollcage is a highly intoxicating battle racer that anybody in his or her right mind should own.
Load Comments (0)