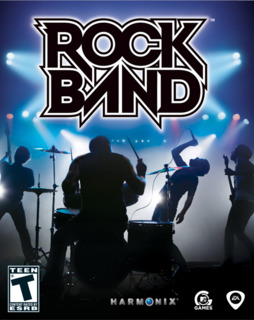 User Rating: 8.5 | Rock Band X360
By Noct | Review Date: November 24, 2007
Understand right up front that I'm approaching this review from a somewhat different angle then the vast majority. For one thing, I have never used any of the actual Rock Band peripherals, and I have not played one single lick of the online aspects of this game either.

Without delving too heavily into my reasoning let me just sum it up by saying that I am not all that involved in online multiplayer in general, and being in that I already own one each of the two Guitar Hero controllers and a Xbox live headset I chose not to buy the entire Rock Band package. I know some reviewers have been raving about the drum experience in RB, but to be perfectly honest I wouldn't have any interest in a "Drum Hero" game and I'm not all that worried about missing out on it here either…

I would normally not review a title without experiencing such fundamental aspects of the game play, but since I have to assume some other gamers will be making this same choice that I have, I feel that this perspective is relevant.

You could look at this as more of a GH vs. RB comparison then a flat out review of the title, so if you're looking for a more comprehensive evaluation of the whole Rock Band package I would suggest you read the professional review of the game instead.

Rock Band is a cool game, there is no doubt about that, but fellow Guitar Hero fans should know going in that it should definitely not be considered a fourth installment in the GH series regardless of the obvious gameplay similarities. RB is clearly intended to be more of an overall band simulation then simply a guitar shredding game, and it definitely shows. I personally prefer the track list in RB by leaps and bounds over the past two installments of GH, but as this game is not centered on the guitar itself the tracks tend to feature less of the carpal tunnel inducing guitar solos then the GH series is known for. Consequently GH aficionados will probably find RB to be much less challenging and not quite as exciting to play if they focus strictly on the guitar aspects of the game.

On the flip side, Rock Band tends to be much less forgiving when it comes to timing your notes, and while the tracks themselves are far easier to play, you will probably find yourself making a lot more mistakes then you likely would playing the same songs in GH. Not only due to the timing being more precise, but because the game itself just seems a bit less responsive then Guitar Hero in my opinion. I don't know if this is partly due to the fact that I'm using a peripheral from a different game, but I don't seem to experience quite as many questionable mistakes playing GH as I do in this title. In particular, the sections that feature rapid successions of the same note or chord seem to be bizarrely difficult to flawlessly pull of. Regardless of whether I attempt these sections by rapidly clicking the pick bar down, or strumming in both directions, I just can not seem to get perfect repetitions when they are coming at any kind of speed.

Another issue I have with the guitar aspects of RB is that the hammer-on/pull-offs look far too similar to the standard notes. RB simply shortens the width of the note icons on these, which can make them tough to recognize during play, particularly when they aren't directly next to a standard sized note.

On the positive side of things, Harmonix has evolved their original concept into a much better overall game experience then it ever was in Guitar Hero. For starters, there are no cookie cutter developer created characters here; you must put together your own personal rock star from the ground up using a nicely flushed out create-a-character mode with dozens of clothing, hair, and accessory options at your disposal. There is even a relatively deep tattoo and face painting system included based largely on the vinyl layering system most console racing games feature these days.

I find it rather annoying that you cannot customize your entire band in this fashion when you play in solo mode; rather you are forced to live with the bizarre ensemble the game chooses for you, which can look extremely odd depending on your choice of style. The band does change as you progress through the solo mode, but rarely did my character not seem completely out of place in the band he was in. Imagine Gene Simmons (in full makeup) joining Hootie and the Blowfish and you can get a pretty good visual of how bizarre this can all end up looking. Seeing as how you can create a full band in the multiplayer modes it seems like this could have been pretty easily implemented into the solo mode if the developers had wanted to allow it.

While on the subject of the visual aspects of Rock Band, the game does look absolutely fantastic, but in a vastly different way then Guitar Hero. From a technical standpoint, GH seems to have better graphics then RB, but it's a tougher call to say which game actually "looks better". GH's graphics seem much crisper then Rock Band's, but RB comes across a lot more realistically then GH does overall. GH seems a bit more "cartoony" in comparison, and the on-stage presentations in Rock Band definitely come across more like you are watching an actual video/concert. The on-stage antics of the band, lip synching and camera angles in RB are much more interesting the GH, and at times the various filters and special effects RB employs will make you feel like you are watching actual band footage. Add to this that the loading screens in RB feature great still shots of your created character (and the rest of the band) on billboards, album covers, and in candid photos that look like they really could have been ripped right out of an actual cd layout.

On an auditory level RB sounds every bit as good as GH does, and at times even better. The songs sound outstanding in digital surround, and when you are performing exceptionally well the audience will actually sing along with your bands vocalist, making it sound all the more like you are listening to an actual band performing live. Guitar Hero will make you feel like more of a guitar god, but Rock Band does a better job of immersing you in an actual concert experience. The only complaint I have about RB's sound design in general is that it can be a little harder to recognize when you have missed a note during play. You will hear a difference of course, but it is not nearly as obvious or disruptive as the metallic clangs GH spews out at you when you make a mistake.

All things considered Rock Band is an excellent game, and probably a lot more fun in a group scenario, but overall it is not nearly as thrilling or rewarding an experience as Guitar Hero for a solo player. Several weeks into playing Guitar Hero 3 I am still struggling with many of the tracks on expert, (and I have still yet to beat "Lou" on any difficulty beyond Medium) but I played through all of RB on hard mode in one sitting, and after finishing nearly half of the game in expert mode I have yet to fail a single track.

Like GH, Rock Band also features downloadable tracks to add to the game, but unlike GH's somewhat annoying track pack setup you can actually purchase the songs individually to create your own customizable set list. Add to this the prospect of buying entire albums to add to the game and Rock Band should continue to be a game you can enjoy for a long time to come. I do not see myself spending quite as much time playing alone in RB as I do in GH, but that cannot be considered a fault since it is clearly intended to be more of a group experience in general.

To put it simply, if you want an excellent single player experience Guitar Hero definitely wins the battle here, but if you are looking for a game you can play online or with a group of friends Rock Band is probably the way to go. Rock on.