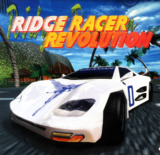 Ridge Racer Revolution plays like a expansion pack, but atleast it's a good one while you play it

User Rating: 7.5 | Ridge Racer Revolution (Playstation the Best) PS
By loopy_101 | Review Date: September 28, 2008
Re-writing a review ain't fun when working with a new system, but I anticipated reviewing this game again. Ridge Racer Revolution had very little difference with it's predecessor, except that this time, the game was more challenging and there were many more tracks to race also.

Let me tell you, the game was awesome at release, even if the differences were minor. The graphics were still slick. The frame-rate was far smoother than competitor Daytona USA on Sega Saturn, it was faster also. The cars were detailed as well as environments and little was there that disappointed. Also, unlike Daytona USA on Sega Saturn, this game suffered far less from pop-up issues, so you could see what was ahead of you much easier.

What can I say otherwise? The game was fun but hard. The gameplay handled differently to the original Ridge Racer which felt weird (especially for me) but give the game some time and the change will feel for the better. Ridge Racer Revolution still has the arcade charm that made the original arcade epic famous, so you'll still start 12th, you'll be able to power slide corners and you'll be able to use that fast sports car you've always wanted.

The best thing about Ridge Racer is the feeling of simply winning a race, be it short or long, it doesn't matter. The feeling is special anyway. Overall Ridge Racer Revolution was a good game. Although despite this it can only be recommended by Serious fans or perhaps people who haven't got the original.
Load Comments (0)