Realize your dreams of becoming a multicolored-ball-spitting stone frog in Zuma Deluxe, a simple but fun Xbox Live Arcade action puzzle game that's like a cross between billiards and Bust-a-Move.

If you've played and enjoyed a bunch of Hexic HD, the free puzzle pack-in that comes preinstalled on the Xbox 360's hard drive, then Zuma Deluxe makes a good next step. Featuring a clean and attractive presentation and a distinct Mesoamerican motif, Zuma Deluxe shares a lot in common with the Bust-a-Move series or even a game of billiards. As a long string of multicolored balls spirals steadily toward the center of the screen, you must shoot like-colored balls into the formation to try to break it up and push it back. The stages get progressively more challenging as more-complex layouts and additional ball colors are introduced, and while the underlying gameplay really doesn't change much, it's still an engaging way to pass the time.

In Zuma Deluxe, you directly control what appears to be a stone frog that spits out colored balls. You can't move the frog, but you can rotate it from a top-down perspective so that it can shoot in any direction. Since the string of colored balls rolling toward you moves at different speeds depending on the level and other factors, you need to take careful aim and lead some of your shots so that they land where you expect them to. When a ball makes contact with two or more like-colored balls, they all disappear, and typically the remaining balls snap shut to close the gap, possibly setting up some big combos. Special power-up balls also occasionally come into play, allowing you to shoot more quickly, slow down or even reverse the rate at which the row of balls moves, and more. If you don't move quickly enough and allow the balls to reach the pits near the center of the screen, you lose a life and must start the level over. The typical level takes just a few minutes, but the action tends to be quite tense and exciting right from the start. The responsive, fairly intuitive controls really do put a premium on your own aim, reflexes, and quick thinking.

The main "adventure" mode is structured as a series of increasingly challenging "temples," each with multiple sublevels. Certain sublevels of every temple challenges you to deal with multiple separate rows of balls, so you effectively have to defend against an attack on two fronts. Sure enough, these levels are quite a bit tougher than usual, and unless you're able to very quickly do some damage early on, chances are you'll end up fighting a losing battle for the next several minutes. It's still fun, but after a while you start to notice that the early moments of a typical level in Zuma Deluxe really are crucial.

In addition to the adventure mode, there's "gauntlet," which is a continuous-play survival mode where the object is to see how long you can last before getting overwhelmed. Apart from the core modes of play, Zuma features several tough-to-earn achievements that help give you an incentive to master the game. Plus, you'll have easy access to leaderboards to see how you stack up against the world's best. Still, it's fortunate that Zuma's core gameplay is so refined, since there really isn't that much variety to the action, which can make justifying the roughly $10 price for the download somewhat difficult.

Zuma's presentation is quite slick, but it's here that the game really could have used more variety. Some excellent sound effects and some enthusiastic tribal beats help drive the action, but the music in particular is probably going to wear thin on you after a while. Nevertheless, this is an attractively presented, smooth-running game that looks particularly good in HD. And some of the audio really is quite nice. The billiards-style effects of the multicolored balls colliding give the whole experience a tactile feel, and the hearty chants of "zuma!" when you pull off a big move are surprisingly encouraging and satisfying.

This is a good, solid action puzzle game for the Xbox 360, all things considered. It has a distinct look and feel and features a much more reflex-oriented design than most puzzle games do. So if you're up for something a little more hands-on than the typical game of this sort, Zuma Deluxe will serve you well. 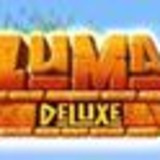 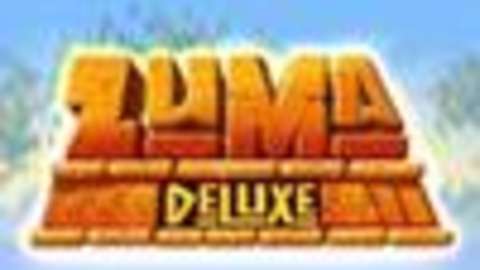