Zoo Tycoon 2 makes some real improvements, but it's still probably best suited for parents looking to play games with their young children.

The sequel to Microsoft's surprisingly successful Zoo Tycoon makes some real improvements to the formula established its predecessor, but it's still probably best suited for parents looking to play games with their young children. Zoo Tycoon 2, like the original game, lets you build a zoo full of different animal exhibits and challenges you to make sure everyone in it stays happy. If you keep your animals happy, they'll remain healthy and entertain your guests. If you pay your staff fairly, they'll remain happy and do an acceptable job of keeping the park clean and the animals cared for. And if you keep your guests happy, they'll be more likely to make donations and purchase refreshments or souvenirs. Succeed at everything, and you'll make you enough money to stay in business, research upgrades (like additional shelters and animal toys for your exhibits), and expand your park. These are pretty much the same goals as in the original game, and Zoo Tycoon 2's campaign mode is similarly straightforward. However, the sequel's enhanced graphics and sound make it a good "sandbox" kind of game, and if you're a parent with small children who need to be entertained, that might be all you need.

Zoo Tycoon 2 offers three major play modes: a single-player campaign with 17 different missions that get progressively more challenging; a challenge mode that lets you build up custom zoos, and then offers various challenges to you over time (like making a certain amount of money); and an open-ended sandbox mode in which you have unlimited funds and the ability to build more or less whatever zoo you'd like. The campaign is relatively straightforward and should take most players upward of 10 hours to complete. It generally requires you to juggle your budget so you can combine the research and acquisition of amenities for your guests and animals with the construction of visitor attractions and the maintenance of your park. Though, in at least a few instances, you'll find periods of inactivity, as your animals, guests, and staff are completely contented, and you simply sit there waiting for your money to increase, or for someone to get unhappy, or for time to pass until the scenario completes. Making your animals happy is also much more straightforward than it was the original game (in which you had to add and subtract trees, plants, and scenery until your exhibit was just right).

Unlike the first game, the sequel lets you jump into the game in a first-person view, as either a guest or a staff member--and as a staff member, you can manually clean up messes left by guests and animals and save a few bucks on maintenance staff. You'll usually end up completing goals by pausing the game and jumping back and forth between your animals, employees, and guests to make sure their needs are being met. This information is presented in a series of icon-based menus that are fairly easy to get the hang of (the game uses green, yellow, and red smiley faces to show mood, and even offers specific recommendations to keep your animals happy).

The challenge mode, which is intended for more advanced players, is also pretty straightforward, though you can make it tougher or easier on yourself by changing the amount of money you start the game with. The sandbox mode is, like the sandbox modes in other management games, open-ended enough to let you make whatever additions you'd like to your zoo. Fortunately, this mode is more appealing than that of the original Zoo Tycoon, thanks to the sequel's fully 3D engine, which lets you raise and lower terrain, renders larger, more-animated animals and guests, and lets you freely manipulate your camera to get a better look at your zoo. You can also build and modify exhibits in a matter of seconds using the sequel's powerful updated editing tools, including a "biome brush" that paints exhibits with specific wilderness environments (such as savannah or tropical rain forest) that are appropriate for different animals, as well as a click-and-drag fence tool that lets you enclose your exhibits.

The new game also lets you zoom in extremely close on any characters, animals, or objects in the world using guest or staff mode, or the game's new photo view. This view, which is available in all three game modes, lets you walk the grounds of your zoo and take photos of the park and animals. Photo view is sometimes used for some of the challenge and campaign goals (for instance, you may be required to take a photo of a cheetah using a scratching post to complete a campaign level), but it's mainly there to let you take photos of your animals and store them in a photo album that can be shared online. Presumably the sandbox mode and the photo view option will be most appealing to children and the parents who play with them.

Zoo Tycoon 2's cartoonlike 3D graphics are certainly a step up from the drab 2D sprites of the original game. However, while the sequel's animals, exhibits, and characters are all large and colorful, they're blocky and simplistic, and not particularly well animated. This is probably to be expected, considering that the game is intended for play on a wide range of computers. Yet for some reason, the game's performance wasn't all that great even on an above-average machine with a 2.4GHz CPU, 512MB of RAM, and a GeForce Ti4600 graphics card, lagging constantly when we scrolled the screen. The game runs considerably better on computers that far exceed the minimum requirements, though.

The game's sound is also extremely sparse. The opening screen plays a remixed version of the first game's theme, and the animals and visitors make various noises, but there's very little in the way of ambient music--even though the game seems like it could have benefited from it. Until you build up a popular and successful zoo full of many happy customers, the game itself is actually eerily silent, and this doesn't seem to make much sense in a game about building up a bustling, active zoo.

Zoo Tycoon 2's campaign and challenge levels should keep most animal lovers busy for at least a little while. However, the game's real value seems to be in its sandbox mode, which, along with the game's "zoopedia" (a reference guide powered by Microsoft Encarta that provides educational animal facts), seems like a great way for parents with kids on their laps to spend some quiet afternoons, pointing out the tiger exhibit and maybe saving a photo or two. 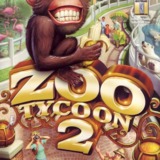 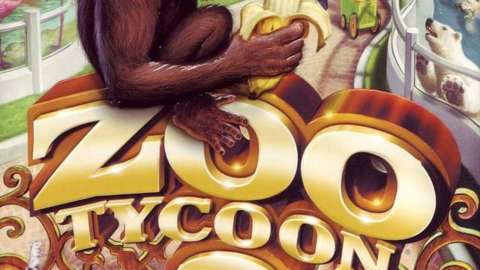 Zoo Tycoon returns to the DS with more animals and a new Zookeeper mode that lets players interact with 3D renderings of their animals.