Does the fact that Sega has added exclusive home-only features mean that Zombie Revenge is much more than a gussied-up arcade port? Not exactly.

What started out as Blood Bullet turned into Zombie Zone ultimately settled in under the name Zombie Revenge. This side-scrolling beat-'em-up has finally made the not-so-long journey home to the Dreamcast in near-perfect arcade form. Think Dynamite Cop with the focus on ammo spending and, well, zombies, and you're just about there. Does the fact that Sega has added exclusive home-only features mean that Zombie Revenge is much more than a gussied-up arcade port? Not exactly.

Originally developed on Sega's Power VR2-based NAOMI arcade hardware, Zombie Revenge is an arcade-perfect port, with the only difference being some slight loading times between levels and cinematics. What this means is if you really loved the game when it required quarters to play, then you certainly won't be disappointed here. If you haven't spent a lot of time with the arcade version, then what's being offered here may warrant a closer look before a purchase.

As a disposable arcade game, Zombie Revenge works for all sorts of reasons. As is the general mindset these days, an arcade game is not expected to do anything more than offer a few minutes' worth of twitch gaming, with the majority of the depth being in the move lists or number of ways to attack. Beyond that, a superfluous storyline to provide some slight semblance of reasoning behind your actions is all that's required to complete the package. The problem is, once the game goes to the next level and comes home to the consumer, its once-suitable premise is exposed for its shortcomings.

You can initially select from three characters: Stick Brightling (the blonde pretty boy), Linda Rotta (the sassy, yet tough, obligatory Jill Valentine wanna-be), and Busujima Rikiya (the funky half-zombie soul brother). All three perform in roughly the same way, with variations in their methods of hand-to-hand combat. Unfortunately, to say all three perform equally is to say that all three control pretty badly. Perhaps the single greatest reason that Zombie Revenge isn't nearly the bang-up action fest it purports to be is because of its control. The shopping list of things that don't work right is long and comprehensive. For starters, when a game pits you against an unfair number of opponents, albeit slow-moving ones, you'd like your character to move with a little more urgency than our trio does here. The Y button controls hand-to-hand attacks that suffer from the worst canned animations you'll find in a game of this kind. What this means is that you're stuck watching your character go through his entire animation before you can right him and point him in the correct direction. When you're trying to fight your way out of a corner full of zombies, this can become a problem. Sega tried to compensate for this by offering the crowd-clearing sweep move. Tragically, you are penalized some health points for doing so, making it only slightly less damaging than actually trying to fight your way out. Why not run, you say, from the heat of battle? That would be a great idea if the controls weren't so illogically mapped to the control pad. To run, you must already be in motion, then press the X button, which normally functions as the block button. Where this becomes difficult is when you're trying to run, but you hit the X button a split second before you're actually in motion, causing you to stand still and block. Sadly, blocking does not work when you're receiving a flurry of punches from all sides, being shot by machine-gun-wielding zombies, or when you're the target of a boss' screen-clearing laser or fire attack. It's a wonder why this function doesn't default to the A button, which isn't used for anything.Picking up special weapons is also a time-consuming burden that leaves you vulnerable to attack while you are doing it. On top of that, one cheap hit and you'll drop anything you've picked up, making it almost not worth bothering with. You will, however, pick the extra weapons up, if only to break the monotony and the pace of the game itself. Instead of being Resident Evil, NFL Blitz-style, Zombie Revenge is an exercise in tedious pacing and mind-numbing repetition. Each zombie is capable of absorbing at least ten to 15 shots. When you're stuck with the default pistol, you can only fire the thing so fast. So while you struggle to move quickly and keep aim, using the highly flaky auto-aiming system, you are only able to squeeze off shots as fast as the game allows, which is to say, not very fast. Amplifying the tediously paced action is the stipulation that you must destroy all the monsters to move on to the next area. Also, certain weapons, such as the flamethrower and the drill, are found in certain spots only and cannot be taken to the next level. To put it another way, the game's best moments are short-lived. Surprisingly, despite its inferior control, this game still manages to be a more engaging experience than Dynamite Cop.

Once you finish the arcade mode, there is the original mode, which adds neat little surprises and items into the almost identical gameplay. Secret costumes and armor power-ups can be had by pressing start and the Y button when you select your character. Stick, for example, will don a Power Ranger-like red suit of armor when you find the armor icon. It doesn't last forever, sadly, and it will disappear when you've taken too much damage. In original mode, you can also select gun mode and bare-knuckle mode, which, as the names imply, rely more heavily on the respective combat techniques to add challenge. But this is nothing more than a cheap gimmick in actual practice, since you can still punch and shoot in either mode. Beyond the original mode, there are boss battles a la House of the Dead, where you can practice your skills against the bosses. This doesn't prove to be much of a challenge, since most of the bosses move very little except when they reach 50 and 20 percent health. The tip to defeating the boss is simply to move when it launches its occasional attack. Perhaps the feature that caused the most commotion when it was announced was the fighting mode, which is a simple one-on-one versus mode, Final Fight-style. You can still grab guns or simply punch and kick your opponent, only on a limited stage. The sinker is that your character still controls as stiffly as he does in the regular game modes. The fighting mode gives the impression of being little more than an afterthought, and it remains that way in actual play.

Graphically, the game more than holds its own against other games of this nature. There are some cool lighting effects, such as the flashlight found early in the game. But once again, something cool isn't given any true purpose, since the game is never dark enough to require it. Thus, lacking an atmosphere along the lines of Silent Hill, Zombie Revenge's sole flashlight appearance is wasted. Character models are a bit on the sausage-y side, but everything runs in high resolutions at 60fps. The soundtrack is appropriately horror movie-esque, but it doesn't elevate the game experience one bit. While the sound effects are generally fine, the one-note crack of the relentlessly fired gun tends to get tiring quickly. The voice acting is uniformly atrocious, but that's practically the unspoken MO for survival horror games, so it's no worse than anything the Resident Evil series has thrown at us.

Perhaps the coolest part of the game is when you reach the stage that approximates the actual House of the Dead opening stage, only this time it's viewed from a third-person perspective. Acknowledging one's past creations is a welcome trend, and in this case, it works.

Objectively, it's not as if Sega didn't try to add longevity to Zombie Revenge. It most certainly did, but to put it bluntly, the company still has a long way to go before it reaches a Namco level of quality insofar as home conversions are concerned. The extra modes are more novelty than added value, and the fact that the game itself is severely flawed makes the extra modes nothing more than severely flawed extra modes. While this sort of gameplay may suit some folks just fine, someone looking for a good reason to part with 50 bucks should look elsewhere. It's worth a rental for curiosity's sake, but it'd be better to wait and see if Sega gets the sequel right. 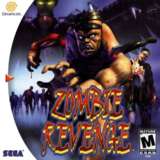