Poseidon is as enjoyable as Zeus and suggests that Impressions' city-building series will just keep getting better.

Last year's Zeus: Master of Olympus was the best game to date in Impressions' city-building series, as it improved on the ideas of the Roman-themed Caesar games and their Egyptian counterpart, Pharaoh, while adding new tasks and mechanics that made the game's formula more complex and enjoyable. Poseidon, the official expansion for Zeus, doesn't include many new features, but it does include some significant ones. The game is set in Atlantis, and the fantastical setting has allowed the designers to take more creative license with the mission design. The result is as enjoyable as Zeus and suggests that Impressions' city-building series will just keep getting better.

The first city you will build in Poseidon is Atlantis itself, and the landscape is based on Plato's description of the city as a series of concentric rings. Your primary goals are the same as in previous city-building games: Build a prosperous city, establish trade with your neighbors, and perform various tasks to please the gods. Each of these goals has been slightly altered for Poseidon. The most basic change is the most obvious--many of the buildings have been colored in shades of blue. But Poseidon's changes are more than just superficial.

The most significant difference in the early part of the game is the lack of entertainment structures. No longer will you need to build gymnasiums and theaters to keep your people happy. Instead, your population will want to learn, and scientific outposts are needed so the city will grow. You'll need to build bibliothekes, inventor's laboratories, observatories, and museums, as well as workshops and universities to supply them with employees. The scientific structures play the same role as entertainment structures did in Zeus, with one drawback: The yearly competitions have been removed, and nothing has been included to replace them.

Most of the changes in Poseidon are this slight and subtle, and they're mostly just new features that make only slight changes to the game, if any. For instance, there are several new ways to beautify your city, including stone circles, orreries, and water parks. The residents of elite housing need chariots instead of horses. There is a new food type available. And you can gather and trade two new raw materials, black marble and orichalc.

The new raw materials are required for the building of pyramids, one of Poseidon's most significant additions. The idea is from Pharaoh's expansion, Cleopatra, but the implementation is slightly different. To build pyramids, you'll need a good supply of marble, black marble, wood, and orichalc. The pyramids range from small to huge, and even if they aren't required elements of your city, they are great for improving the appeal of neighborhoods. In addition to pyramids, you'll also have to build wondrous structures such as special observatories and museums. These are basically pyramids with another building on top. The new pyramids vary from campaign to campaign, and they help keep things interesting.

The new materials are also used for creating the sanctuary to Poseidon, the only new sanctuary in the game. Unfortunately, the previous sanctuaries haven't been changed to require the new materials. While this makes them easier to build, it would have made for a nice aesthetic change if the sanctuaries from Zeus could be adorned with the new materials. Nothing has been changed in terms of pleasing the gods, and you'll still need to perform quests for them. To this end, two new heroes can be summoned to your city: Bellephron and Atalanta.

The only other significant addition in Poseidon is the hippodrome. The hippodrome is a horse-racing track that brings both money and happiness to your city. It can be as long as you like, though building it is somewhat difficult. You must hold the cursor down and wait while the different track segments cycle through. It's easy to get the wrong piece, and even easier to find that the track won't fit in the area you've planned. This is especially frustrating when you've laid down a huge track already, only to find your entire plan must be scrapped. The hippodrome is a great addition to the city, but creating it is a chore.

Luckily, one of the previous game's biggest chores has been all but removed. Combat plays an almost insignificant role in Poseidon, as for most of the game you'll be prevented from attacking other cities because of a pact with the gods. You'll still need to keep a strong force at home in case of invasion, but otherwise the conquest element of the game is almost entirely gone. This may frustrate those who liked the combat elements of Zeus and its predecessors, but it helps alleviate the problem of Zeus' subpar combat interface.

Even though there aren't very many of them, the additions in Poseidon are enough to revitalize Zeus. You get to trade with cultures like the Maya (perhaps a hint of things to come) and create great new structures. There are plenty of new campaigns and missions, and the new structures and colors make the game look even more cheery than Zeus. It's enough to make you hope that Impressions will pick an even more fantastic setting for the next installment in the series, but for now, Poseidon is satisfying enough to add some life to one of the better strategy games of last year. 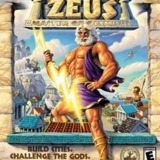