Zero Escape: Zero Time Dilemma is a game that refuses to be pinned down. It explores quantum physics and meta probability, horror tropes and memory loss, revealing hidden nuances as it unfolds like an origami swan. There are a slew of minor problems that mire its intriguing story, but nonetheless, Zero Time Dilemma wields complex topics to paint a morbid tale about the essence of human nature.

This is the third in a series of adventure games that eschew linear storytelling techniques. As in the first two titles, Zero Time Dilemma focuses on nine individuals who have been locked up by the villain Zero, forced to compete against each other in "escape room" puzzle situations. In this case, the victims are trapped in a bomb shelter miles underground--in order to get the six codes necessary to open the exit door, Zero tells them, six people must die.

This is the basic setup. From here, though, the story branches in every which direction, doubling back on itself and correcting plot holes that weren't actually plot holes to begin with. At the beginning of each chapter, Zero Time Dilemma asks you to select one of the three teams--each with three members--and play through one of their memory "fragments." They're titled as such because at regular intervals, bracelets on the characters' wrists knock their wearers out, injecting memory loss drugs that upend the victims' sense of time.

There's no guarantee that you're playing these events chronologically, and the characters know it, too. "We slept for seven hours," one character mutters, glancing at the timer on his bracelet. "Or," says his teammate. "We woke up several times, and don't remember anything at all."

This facet of Zero's "game" creates some of the more horrific and intriguing situations of the story. Teams build up trust between each other, only to forget it all once they wake from a deep sleep hours later--earlier?--and start from scratch. Without memories, is it possible to build trust? "When we lose our memories, are we reborn?" a character wonders, in one of the game's more potent moments. Despite the fact that it's up to us who dies, there's still a genuine tension in seeing how characters and teams distrust each other to the point of considering murder.

In examining how memories affect our perception of time, Zero Time Dilemma also reaches into more complicated topics about humanity itself. Are we inherently good, capable of altruism in dire circumstances? Or are we animals with predetermined instincts that merely extend our chances for survival?

The game raises the question, but doesn't pretend to have the absolute answer. Some characters resort to suspicion and torture, while some rely on the goodness of the other teams, despite the lack of communication between them. Zero Time Dilemma veers suddenly into horror to illustrate the extreme measures some characters will go to, regardless of the guilt they'll feel in the aftermath. While the blatant shocks and sometimes fetishistic gore lend some surprise to proceedings, they often feel out of place--Zero Time Dilemma may be a chaotic collection of memory fragments, but it also struggles to find the right tone.

In examining how memories affect our perception of time, Zero Time Dilemma also reaches into topics about humanity itself.

What's compelling isn't the story itself, though. The real hook is the actual process of piecing things together. Playing Zero Time Dilemma is akin to reading a book out of order as someone hands you one random page at a time--you can reread pages, absorb new ones, and rearrange them all to make more sense as time goes by. Zero Time Dilemma is the rare game that places structure over substance, and for much of the time, gets by on doing so.

But Zero Time Dilemma's structure is so daring that it can't support meaningful character development. The cast wades through expository dialogue and poorly written conversations throughout the majority of the game's chapters, only saying anything worthwhile once you've suffered through boring monologues and cloying clichés.

To be clear, the characters' confusion is justified--they don't have memories and prior understanding to fall back on, after all. But their vapid personalities don't make the trek any better. They're one-dimensional mannequins with sometimes shocking secrets to share, but they mainly exist to move the plot forward, backward, sideways and in circles around itself.

It's no surprise Zero Time Dilemma relies on its characters for exposition, because its mediocre presentation doesn't help at all. Whereas 999 and Virtue's Last Reward--the previous games in the series--use graphic novel formats to tell their stories, the new entry uses animated 3D cinematics. This is a mistake.

I can't decide which is worse: characters' facial animations or their movement. The former consist of blank stares and stiff turns-of-the-head. The latter are extremely limited as well--it feels as if Zero Time Dilemma doesn't know how to portray anything more complex than walking, pointing a gun, or lying on the floor. In fact, often when something momentous is happening, the camera cuts to the same shot of the same ceiling panel, opting instead to convey the scene through audio cues such as gunshots, screams, or explosions.

It's telling that the actual escape-room puzzles take such a back seat to the story. This is due in large part to the non-chronological narrative--but also to the inconsistent quality of the puzzles themselves. Many of them are well designed: one particular room with rotating walls toys with your sense of spatial reasoning, while another conveys hints through small statues in various significant poses.

Too many of the escape rooms eschew the subtle guidance of a good puzzle, and make the same mistakes as old school adventure games.

But too many escape rooms ignore the lessons learned from the missteps of old school adventure games. Too many require constant clicking on seemingly innocuous details on the screen. Too many eschew the subtle guidance of a good puzzle, opting instead to rely on point-and-click mechanics, creating frustration and removing you from the experience almost as much as the poor animation and dialogue do.

Nevertheless, my understanding of Zero Time Dilemma during its first hour and my understanding as it came to a close could not be more different. It's a complex narrative built around a chaotic, intriguing structure. It may stumble too many times with its dialogue, fail to find much substance in its characters, and lack any impressive presentation. But it uses that fragmented structure to keep you guessing, and engaged, right up to its numerous depressing, hopeful, gruesome endings. 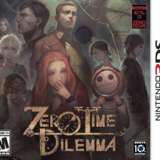 Mike Mahardy played Zero Escape: Zero Time Dilemma for 12 hours, and could only stand about three characters. Nintendo provided a copy of the game.