Problematic platforming and awkward action add up to crummy adventures for Zack Zero.

You may not have heard of Zack Zero, but you know the type: a hard-working space ranger who defends his planet against hostile aliens using his powerful supersuit and likes to take his lady on vacation. After an unusually bad voice actor describes the abduction of said lady by said aliens, our typical hero embarks on a bland adventure packed with clunky platforming action. Zack's herky-jerky jumps make it a chore to navigate the perilous levels where legitimate hazards and design flaws are equally threatening. His suite of elemental abilities fuel some flashy combat and light puzzles, but both are burdened by problems that keep either from being entertaining. While the environmental design makes some levels pleasant to explore, Zack Zero is too fraught with shortcomings to make it worth the trip.

After thwarting an alien conquest attempt and causing the untimely death of the alien leader's brother, Zack Zero and his beloved Marlene have made themselves a target. Zulrog wants to time travel and regain his lost sibling, which involves kidnapping Marlene for some reason. So Zack sets off to rescue her and, as a secondary objective, save the universe. Zack's progress is depicted in minimally animated cartoon cutscenes that are narrated in storybook fashion. Unfortunately, the drawings are simplistic and the voice actor is awful, so what might have been a nice treat between missions comes off as a hackneyed mess.

With the aesthetic bar set low, you embark on your travels through alien landscapes. Colorful flora and some good environmental detail make the outdoor areas appealing, though the same can't be said for the stock sci-fi interiors, which are full of shiny metal and neon lights. Some areas benefit from a nice sense of depth, and the two-dimensional path you walk occasionally winds into the foreground or background, further enriching the environment.

Unfortunately, Zack Zero takes this effect one step too far. In some areas, you can jump into the background to traverse platforms, as you can in Little Big Planet 2. Yet that game had a distinct sense of switching between two planes, whereas Zack Zero's maneuvering is much more muddled. You might fail to shift position sufficiently despite inclining the analog stick properly, turning your jump to a recessed platform into a fall to your doom. The visual cues that signal such jumps are inconsistent and the separation between planes is not clean, so you may think a hazard has moved safely into the foreground when in fact it can still damage you. Though it sometimes looks pretty, visual depth fails to translate into a coherent gameplay mechanic, and the action suffers for it.

Not that the action does well on its own. Zack can jump and double-jump, but he is a graceless fellow. He shoots into the air abruptly, but his trajectory plunges sharply about three-quarters of the way through, which can cause some frustrating deaths until you get the hang of it. Furthermore, the double-jump timing is inconsistent; sometimes you can initiate his second jump at or after the apex of his leap, sometimes not. This makes negotiating hazards more difficult than it should be, a problem that is exacerbated by intermittent visual bugs (strong updrafts that shoot you into the air may not appear but can still fling you sky-high).

In addition to environmental hazards, Zack must fight his way through various enemies using the powers of his suit. The four states of his suit (normal, fire, ice, stone) each offer different abilities that can be used to destroy enemies and better navigate environments. Fireballs and heavy stone punches are good for destroying enemies, while the freezing tornado and blinding explosion can help you manage crowds. Fire-surfing through the air and slowing down time with your ice power are essential navigational tools, but almost every elemental action drains power from your suit. You have to watch your automatically regenerating bar to make sure you don't run out of juice at an inopportune moment, though the normal attack ensures you are never without a weapon.

Though you can always attack, you are likely to wish for more defensive options. Zack is not a very durable hero, and a few hits from your enemies are enough to send you back to a previous checkpoint. There is no way to block or deflect enemy attacks, so evasion and attack are your only tools. You have to be extra diligent about dodging, though, because the hit detection is such that even if there is a visible distance between you and your enemy's weapon, you can still take damage. The visual-depth confusion also becomes an issue in combat because enemies coming in from the foreground or background can target you. Zack will sometimes automatically target them, sometimes not. Additionally, attacks that deal area damage may kill enemies on one plane but not the others that are adjacent on another plane. Inconsistent mechanics put an extra strain on Zack's fragility, making combat doubly frustrating.

Assiduous use of your varying abilities is the best way to survive in a fight, and you can combine certain effects, like blowing up a frozen soldier with a fireball. These attacks still have the same basic effect, and it's a shame that they aren't used more cleverly, but combo attacks will net you a neat little point bonus. Online leaderboards offer an outlet for competition, but Zack Zero implements them in a glaringly intrusive way. While playing, pop-up messages frequently notify you of the score leader on your current level, as well as the overall score leader. These messages pop up roughly once every 60 seconds. When you add in separate notifications for your friends list, not a minute goes by without some kind of score popping up onscreen. The only way to disable these constant intrusions is to sign out of the PlayStation Network.

There are other problems that plague Zack Zero, such as invisible walls and a level-up screen that interrupts whatever is going on onscreen, regardless of the danger you might encounter. There are precious few elements in the game that are not hindered by flaws, which make it more difficult to play and enjoy. Yet even without these problems, Zack Zero lacks the appeal and ingenuity found in many other downloadable platformers. At $12.99, Zack Zero is overpriced, underdeveloped, and outclassed. 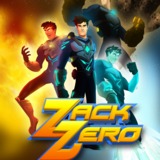 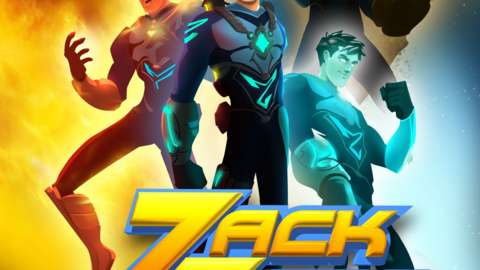 Zack Zero is an action platformer starring a hero with a suit that has three elemental powers.