Zack & Wiki is a delightful blend of the Wii's motion-sensing technology and challenging yet approachable puzzle design.

Zack & Wiki is one of those sink-or-swim kind of games, the sort of thing that is conceptually so offbeat that if the execution isn't spot-on, the whole thing could drown. Good thing this one's got water wings. Essentially a puzzle game pretending to be a more traditional adventure, Zack & Wiki is the sort of weirdly engaging game that, dare we say it, probably could only really be done on the Wii hardware. The whole thing is played solely with the Wii Remote, but unlike the many games that have ended up (literally) flailing when trying to create motion controls that are both intuitive and fun, Zack & Wiki instead thrives, making few control missteps and creating an experience that's equally challenging and accessible.

In the game, you control Zack, a young boy in oversized pirate regalia that evidently belongs to some sort of piratical consortium known as the Sea Rabbits. Alongside Zack is his trusty sidekick, Wiki. Wiki is some kind of golden monkey that can use his tail like a helicopter blade, talks a little bit like an anime schoolgirl, and periodically turns into a bell. More on that in a bit. Anyhow, the premise of the game is pretty simple. While on expedition, Zack, Wiki, and his trusty pilot Johnny Style (a rabbit in stunner shades) are attacked by the vile Rose Rock pirates, a posse headed up by a mildly bipolar female pirate named Captain Rose. After ejecting from their plane and crashing on an island, Zack quickly discovers a treasure chest that contains the golden skull of a legendary pirate named Barbaros. Barbaros has been cursed and his body parts have been scattered throughout the world. Barbaros offers to grant Zack a wish if he tracks down his various missing pieces and puts him back together. Thus sets in motion a treasure-hunting adventure.

And by "adventure," we mean more in the vein of classic PC adventure games than in the action adventure sense. This is not an action game by any stretch. You attack each of the game's levels purely with the mentality of solving a lot of crazy puzzles. Each stage is a relatively small space usually with only one or two areas immediately accessible to you. You simply guide Zack to any available items that happen to occupy the area you're in, and figure out how to use them to get to the next section of the stage. From time to time you will run into enemies, but these creatures are less direct threats and more a means to an end. Remember that bell that Wiki can turn into? Just shake it like crazy (by shaking the Wii Remote) and those enemies will turn into useful items.

With all the controls mapped to the Wii Remote, motion control does play a big factor in how you solve each puzzle. Fortunately, nearly all of the game's various control mechanics work flawlessly. You guide Zack around the world by pointing to a spot on the screen and pressing the A button, and he almost always goes exactly where you want him to with little duress. Often times you'll encounter cranks that must be turned, knobs that must be twisted, levers that must be pulled, and items that must be placed just so, and each time you'll have to hold and move the Wii Remote in a very specific way. Save for a few motions that for some reason just don't want to cooperate (cranks that turn left when you turn right and whatnot), all this stuff works great. And the times when the game gets really silly with the motion controls are actually pretty funny. This might be the first game to employ realistic baby-cradling mechanics via the Wii Remote.

On top of good control, Zack & Wiki's puzzle designs are fiendishly clever, and in a very deceptive way. Early on the game is a breeze, and you might find yourself worried that all you've got coming is a bunch of short puzzles in teensy levels. The good news is that things don't stay brief and easy for long. Though the level designs never grow very big, the methodology for solving each stage's tricky puzzles is rarely in plain sight, and a good bit of experimentation and problem-solving skill is required, especially in the game's devilish later levels. The really great thing about these brain teasers is that they never feel completely impossible. Because of the relatively small space you have to work within, all the elements you need to succeed are typically within visual range. It's a matter of figuring out how each of the various pieces you're provided fit into the frame of the level, rather than aimlessly wandering around hoping for some solution to present itself magically. And if you do happen to get stuck, you can buy hints at the game's hub area to use in any level you see fit. You can also buy extra lives that will respawn you at the point you were at right before whatever trap or bad guy you happened to run into horribly murdered you. That comes in handy, since otherwise you may find yourself restarting puzzles from the beginning quite a bit.

Zack & Wiki is the sort of game that, if you know all the solutions, you could probably blow through in a long afternoon. Odds are it will take you quite a bit longer than that on your first play-through, since you'll undoubtedly have to spend some time staring at all the various pieces of the puzzles before things will start to make sense. Fortunately, the game does have some replay value. Apart from hidden treasure and items you can discover, some of the puzzles themselves can even be solved multiple ways. Additionally, there's a sort of multiplayer component to the game, albeit a mostly observatory one. Essentially, up to three other players can point their Wii Remotes at the screen and tap on or highlight any items or set pieces that might be relevant to solving a puzzle. Only one player controls Zack, so in effect the other players are just helpers. Still, it's kind of a cool idea, and an inventive way to get the rest of the family involved in the game, if you're into that sort of thing.

If Zack & Wiki has any particular failings, it's that the title characters are basically irrelevant. Zack & Wiki are certainly cute characters, but they're not used to particularly good effect within the scope of the story. In fact, there really isn't much of a story at all. The game quickly introduces all the key players in relatively haphazard fashion, then just hops right into the action. The writing is decent enough in the few bits of dialogue you encounter, though there isn't much voice acting beyond a few one-liners in Japanese that each character uses to emote feelings. And usually what they're feeling is something rather shrill and overwrought. It's not awful stuff, but it is a bit grating to hear Wiki's high-pitched exclamations throughout longer play sessions. Zack's personality is to do a lot of victory poses, make comical faces when something bad happens, and chew on chocolate bars. Ultimately it doesn't matter that much, since the level designs and puzzles are the real star of the show. It's just a shame that the story itself is so half-baked and that the characters aren't really given more endearing personalities. This is potentially the start of a cool new franchise, and the characters at the forefront of it just aren't that memorable.

One area where the game does not disappoint is visuals. Zack & Wiki might just be one of the nicest-looking games on the Wii, thanks in no small part to the game's sharp artwork. The game is done up like a cartoon, but not with the sort of lazy cel-shading most games use. All the characters and environments are bright, colorful, and incredibly crisp looking. Animation is largely seamless and very well done. While the character designs themselves could have been ripped from any Saturday-morning anime, everything else is so good that you can forgive that one generic aspect. On top of that, the game even performs well. Loading times are minimal, and everything in-game runs smoothly, save for a few minor frame-rate drops here and there.

All told, Zack & Wiki is a winner. It might not win you over with its characters or story, but it will with its wonderfully crafted puzzles and sharp control mechanics. It's just the sort of game Wii owners have been pining for, the sort of game that blends accessibility and challenge into one seamless whole, and does it without devolving into yet another minigame collection. And best of all? This game is retailing for only $40. If you own a Wii, Zack & Wiki belongs in your collection. 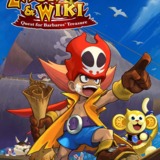